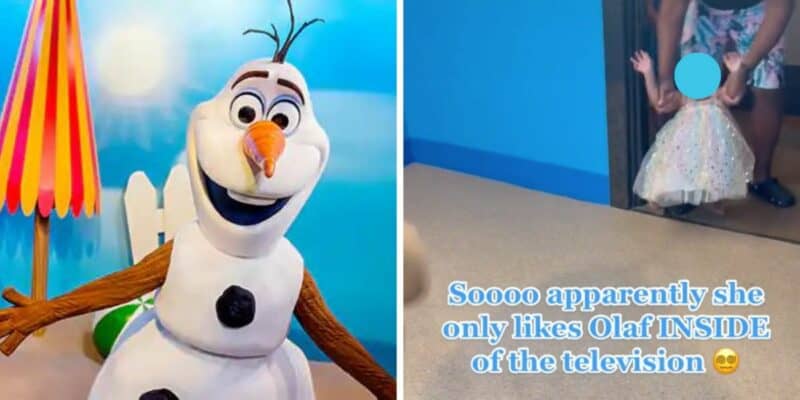 Unfortunately, for some younger Guests, meeting their favorite Disney character can be a bit overwhelming.

TikTok user disgirlmagic shared a video of her child petrified to meet Olaf to social media. According to the user, the child loves Olaf and was “so happy to see his picture on the signs”, but once they entered the room and she was met with the real Olaf, her mindset changed and she was terrified. She wrote:

The mom, of course, made a joke about the whole situation as not only did she post the video to TikTok, but she used the viral “Oh No” sound, making the unfortunate incident a bit more lighthearted.

One commenter chimed in:

Well he isn’t 6 feet tall in the cartoon, so I understand her fear 😂

And another fan wrote:

We hope the poor little girl was able to overcome her fears and meet Olaf, however, if this wasn’t the case — there is always next time!

Olaf is currently meeting Guests at Disney’s Hollywood Studios. He is best known as the friendly snowman from the Frozen franchise, where he is voiced by Josh Gad. Walt Disney World describes this character meet and greet as:

Come see Arendelle’s coolest resident as he steps into the Celebrity Spotlight to take photos with friends old and new.

Have you ever met Olaf at Disney’s Hollywood Studios? Let us know in the comments below.

Comments Off on Child Petrified to Meet Olaf, Kicks and Screams In Parents Arms