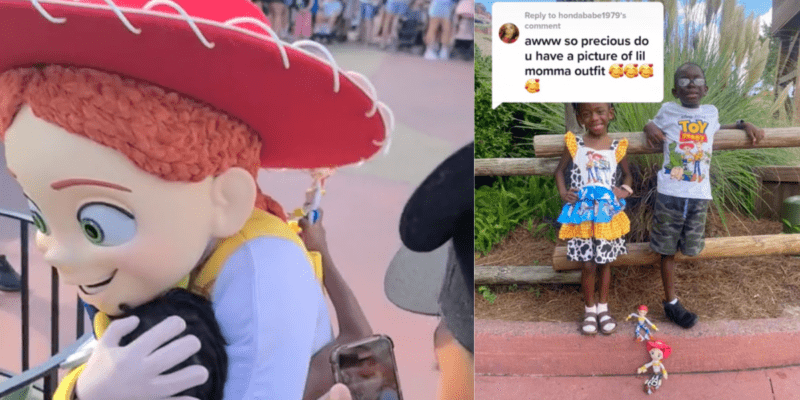 Last week, we reported on a viral video of our Toy Story (1995) pal Woody getting Jessie’s attention so she could hug an excited young fan, Havyn, during a parade at Magic Kingdom. The video was a welcome feel-good story after allegations of racist character interactions at Sesame Place, LEGOLAND New York, and even Disneyland Resort.

The video was initially shared on TikTok by Havyn’s father, @lifesigma, and later made its way to Twitter:

Woody help make Havyn day!!! She got to get a Hug from Jessie #disneyworld #yougotafriendinme @hey_ma_heyyy #magickingdom #toystory #Woody #Jessie

A Black family is watching a parade in Liberty Square when Jessie and Woody from Toy Story (1995) walk by. Their young daughter is dressed in an adorable cowgirl dress, similar to Jessie’s pants, and the family is waving to get Jessie’s attention. Woody sees Havyn’s outfit and motions to them to wait. After Woody gets her attention, Jessie runs over to Havyn, hugs her, and blows lots of kisses before continuing on her parade route.

TMZ reached out to the family for comment. They said they hadn’t heard of the incident at Sesame Place or the 25 million dollar discrimination lawsuit when they posted the video.

Though they didn’t expect the video to go viral, the family said they were happy to be an example of a positive Disney Parks character interaction. They said their experience should be the norm for children of any race.

Havyn was hoping for a wave from Jessie as she patiently waited in her Toy Story dress, so she was thrilled to get that special hug. She even brought her Woody and Jessie dolls with her, shown in another TikTok from her father, Harold (@lifesigma):

According to TMZ, Harold and his wife, Candice, say everyone’s child deserves acknowledgment from the characters they love.

Woody and Jessie did a fantastic job making Havyn feel special and creating a Disney Park memory she will never forget!