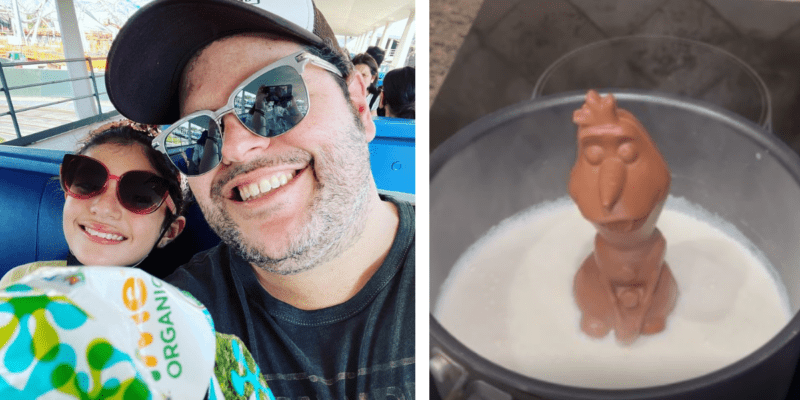 Some cocoa is worth melting for.

Josh Gad, best known in the Disney community for voicing Olaf in the Disney animated film series Frozen (2013), and for playing LeFou in the live-action Beauty and the Beast (2017), just posted a video on his social media showcasing his family’s latest endeavor.

Gad can be seen with his daughter and wife melting an Olaf chocolate bomb on their stove, but it seems he may have had some regrets.

Not gonna lie: having mixed feelings about this chocolate bomb.

Not gonna lie: having mixed feelings about this chocolate bomb. pic.twitter.com/4w7nrZVpnw

As the Olaf chocolate bomb begins to melt, Gad along with his wife Ida Darvish and daughters Ava and Isabella could be heard in the clip remarking, “This is very depressing.” Gad hilariously points out that they should’ve gone with a Moana (2016) character instead.

Even Disney Parks couldn’t help but comment on the video, which now has more than 444,000 views.

“We’re guessing you don’t have much experience with heat.”

Here is what Disney Wiki says about Gad’s character Olaf:

Olaf is a major character in Disney‘s 2013 animated feature film Frozen and its 2019 sequel, Frozen 2. He is a benevolent enchanted snowman created by Elsa. Along with the ability to reassemble his body, Olaf’s most prominent quirk is his love for summer and all things hot.

Gad recently shared a post of his family at Walt Disney World Resort. He met with Disney princesses, took in many of the popular attractions, and even mimicked Olaf. The Frozen and Beauty and the Beast actor shared photos from that included him riding the Tomorrowland Transit Authority PeopleMover, eating at Be Our Guest, and an obligatory family photo in front of Cinderella Castle.

Gad’s latest project with Disney is Olaf Presents and the animated short series is currently streaming on Disney+.

In “Olaf Presents,” Olaf steps into the spotlight and goes from snowman to showman as he takes on the roles of producer, actor, costumer and set builder for his unique “retelling” of five favorite Disney animated tales in “Olaf Presents,” a series of new animated shorts from Walt Disney Animation Studios. The charismatic and versatile Olaf demonstrates his theatrical flair, taking on such iconic roles as a mermaid, a genie, a lion king (and most of the parts in between), as he entertains Arendelle with his delightful abbreviated versions of these beloved tales.

Have you seen Olaf Presents on Disney+?

Comments Off on Josh Gad Has Regrets On Olaf Chocolate Bomb