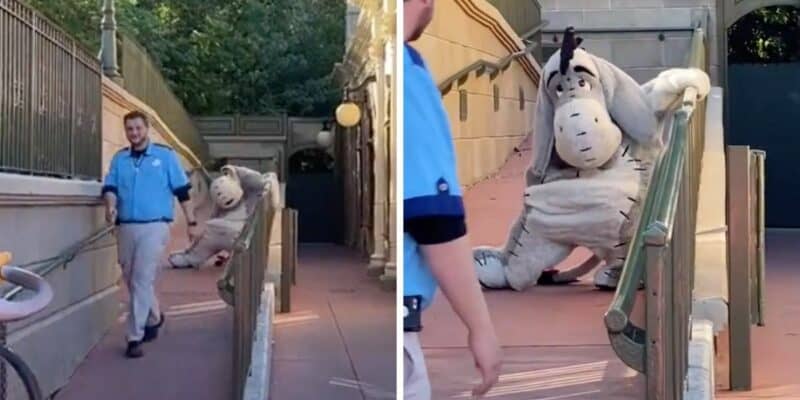 Due to the COVID-19 pandemic, Disney World reimagined how Guests could interact with Disney characters while still enforcing social distancing. One of the ways Disney World brought characters to Guests was by having them show up at various locations that were over six feet from Guests.

For example, Mickey and friends could be seen on top of the train station at Magic Kingdom. And although social distancing protocols have been removed from the Parks, Disney characters are still making surprise appearances at the train station.

Recently, Guests spotted Winnie the Pooh and friends at the train station, waving to Guests below. Once it was time to go back to the Hundred Acre Wood, the characters walked down the ramp and backstage. Eeyore, however, had a bit of trouble walking down the ramp and ended up taking a fall.

TikTok user disneymommagic caught the moment on video, which you can see below or by clicking here. They captioned the video:

Luckily it seems Eeyore was okay as he got back up rather quickly and continued down the ramp, but it is always scary to see when a character takes a fall.

Have you ever seen a Disney character fall while at the Parks? Let us know in the comments below.