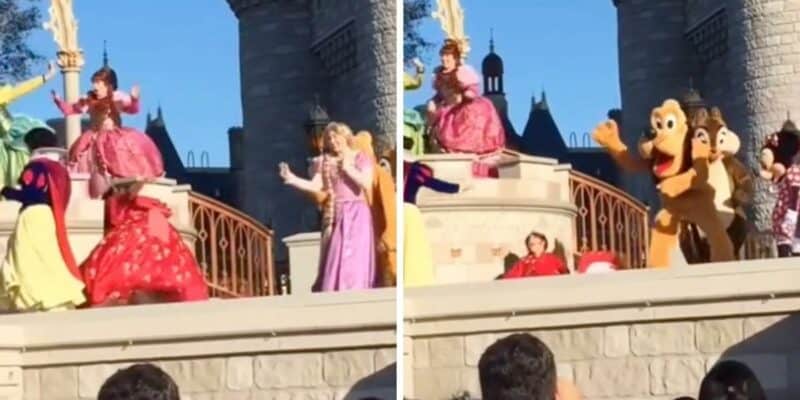 Mickey’s Magical Friendship Faire returned to Walt Disney World after a month-long closure due to the ongoing pandemic. The castle stage show, which used to be referred to as Mickey’s Royal Friendship Faire, is a fan-favorite stage and takes place in front of Cinderella Castle multiple times per day.

During one performance of the stage show, Princess Elena of Avalor had a misstep and fell down, flat on her face.

In a video shared to TikTok, as Guests gathered around Cinderella Castle to catch a performance of Mickey’s Friendship Faire, Princess Elena of Avalor had an unfortunate misstep and fell flat on her face.

Princess Snow White went rushing over to Elena and helped her back up to her feet as the show continued on.

Luckily it seems that Princess Elena was not injured as she got up shortly after her fall and continued on with the show. We also want to note that it is unclear when exactly this happened, but reports have come in stating it occurred back in 2018, prior to the ongoing pandemic.

Mickey’s Magical Friendship Faire recently returned to Magic Kingdom and is described as:

If you plan on checking out Mickey’s Magical Friendship Faire on your next Disney World vacation, make sure to check the My Disney Experience app for the most up-to-date showtimes.

Have you ever seen Mickey’s Magical Friendship Faire? Let us know in the comments below.