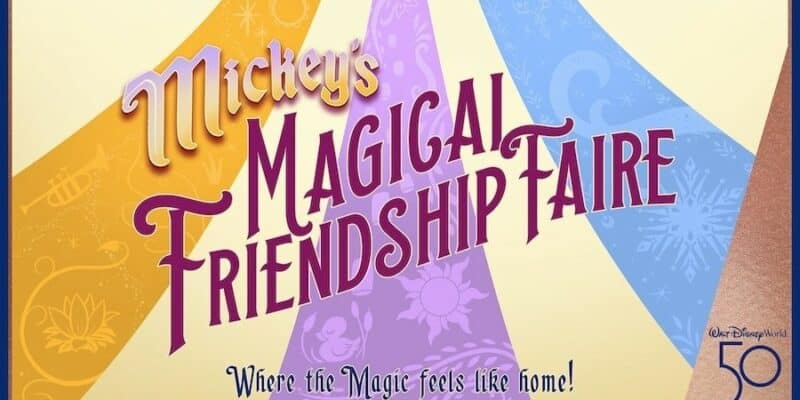 Gather round, friends, Mickey’s Magical Friendship Faire is about to return to Magic Kingdom Park! Placed on the large stage in front of Cinderella Castle, the seasonally peppered show is tweaked for Walt Disney World Resort’s 50th Anniversary with new sequences, costumes and begins in a few short weeks!

As more and more entertainment returns to the Disney Parks, Magic Kingdom is not going to be left out. The Disney Parks Blog today tips us off that Mickey’s Magical Friendship Faire is about to return on February 25, 2022. With glimmering additions featuring the 50th Anniversary palette of EARidescent colors, the “newly enhanced” show will bring back our favorite scenes as well as a new finale number celebrating Mickey Mouse and all his friends. 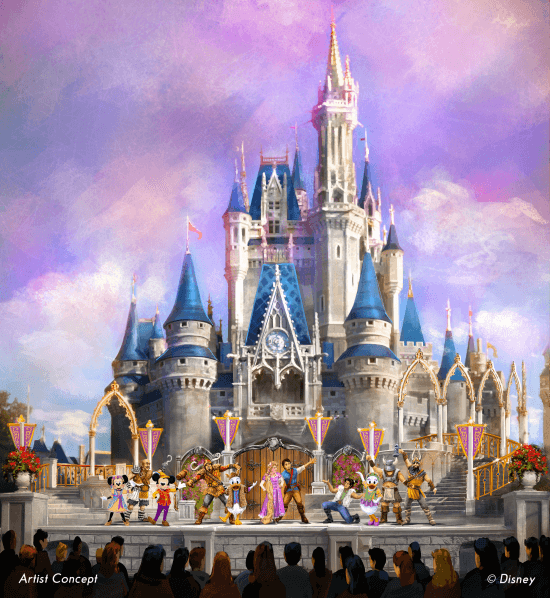 A new finale song, entitled “Where the Magic Feels Like Home,” will be heard several times a day as the show is performed. Be sure to check the Entertainment Guide for showtimes, and be ready for closures if bad weather approaches.  More details are shared by the Disney Parks Blog,

Speaking of shimmering gatherings, “Mickey’s Magical Friendship Faire” will make its debut on the Cinderella Castle Forecourt Stage Feb. 25! The show, newly enhanced for the Walt Disney World 50th Anniversary celebration, will incorporate favorite scenes inspired by “Frozen,” “Tangled,” and “The Princess and the Frog” – plus a new opening and a new finale with Mickey Mouse and all his friends in their sparkling, EARidescent fashions. Presented multiple times a day, the show will also include an all-new, original song entitled “Where the Magic Feels Like Home.”

These new and returning experiences add to the all-new entertainment that debuted with the launch of the Walt Disney World 50th Anniversary celebration, including “Disney Enchantment,” “Mickey’s Celebration Cavalcade,” and “Harmonious” – with more to come when “Finding Nemo: The Big Blue… and Beyond!” and “Fantasmic!” open later this year. Be sure to follow #DisneyWorld50 and keep reading Disney Parks Blog for all the news and updates throughout the celebration!

More entertainment also returns in the form of the largest character cavalcade we’ve seen yet on February 11, 2022, which will include the likes of Nick and Judy from Zootopia, Baloo and King Louie from The Jungle Book, José Carioca and Panchito from The Three Caballeros, Miguel from Coco, plus Merida, Moana, The Incredibles, and more making their way around the Park! We’ll also get our beloved Festival of Fantasy parade back on March 9, 2022, which is actually the anniversary of the debut of the parade in 2014!

A Faire to Remember – It takes a whole enchanted kingdom to put on this show—and you’re cordially invited. Look for Tiana and friends from The Princess and the Frog and Rapunzel and Flynn from Tangled. Mickey even recruits Olaf, Anna and Elsa from Frozen to join in!

Will you be front and center, waiting to see the amazing fashions and finale number? Leave us a comment below!