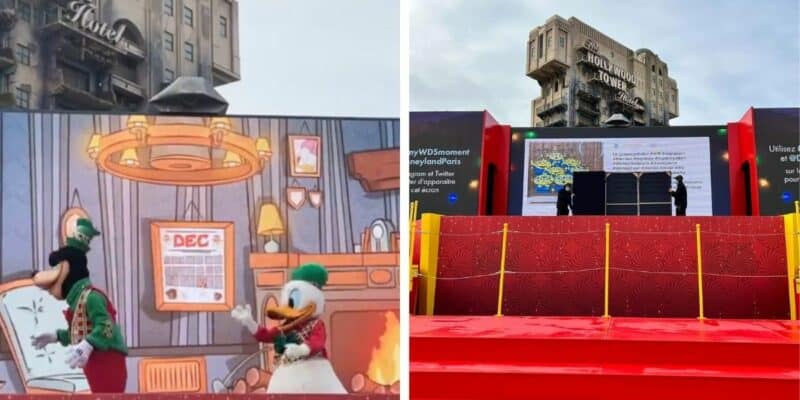 While the Disney Parks tend to do a fantastic job creating entertainment for Guests, especially when it comes to their stage shows, things can always go wrong.

Although this does not often happen, when it does, Disney does their best to make the show go on. But of course, there are instances in which the circumstances cause for the show to come to a stop if there is a technical aspect causing an issue, or perhaps a performer who cannot go on.

At Disneyland Paris Resort, the holiday season has officially begun, and one of the new offerings is a show called A Funny, Snowy Winter, which is a stage show that takes place in front of the Tower of Terror. That being said, it seems that during the show’s first performance, there were some technical issues.

MouseKingdom – Disney Parks Guide (@Mousekingdom) took to Twitter to announce that the show had to be canceled midway after Donald got “stuck” in the basement. It seems Donald was fine, but there could not be a show with one of the main characters missing!

The first showing of “A funny, snowy winter” at Walt Disney Studios was canceled shortly after it started when Donald “fell” in the basement and was stuck there.

Don’t worry, he’s fine! The cast members were able to free him and he waived goodbye when he left.

The first showing of "A funny, snowy winter" at Walt Disney Studios was canceled shortly after it started when Donald "fell" in the basement and was stuck there.

Don't worry, he's fine! The cast members were able to free him and he waived goodbye when he left.#donald #goofy pic.twitter.com/o0y9WriUSK

DLP Dream (@DreamDlp) shared a video of what happened, and as we can see, Donald was meant to “fall” into the basement, but when Goofy hits the red button, he should come back up. The audio ended up having Goofy talking to no one, even though it was Donald who was meant to respond. Because Donald was literally stuck, the show was canceled.

Black scrims were put up on the stage as Cast Members rescued Donald from the “basement.” In this instance, we can see that Donald’s mishap was completely mechanical and that the performer was seemingly not injured. Hopefully, Donald never has to get stuck again after he falls in the basement in future showings!

Have you ever noticed something go wrong while watching a show at the Disney Parks? Let us know in the comments below!

Let the expert team at Academy Travel help you plan your next magical vacation to Disneyland Paris Resort! Or what about Walt Disney World Resort’s four theme parks? Magic Kingdom, EPCOT, Disney’s Animal Kingdom, and Disney’s Hollywood Studios — and the Disney Springs shopping and dining district are just one plane ride away!