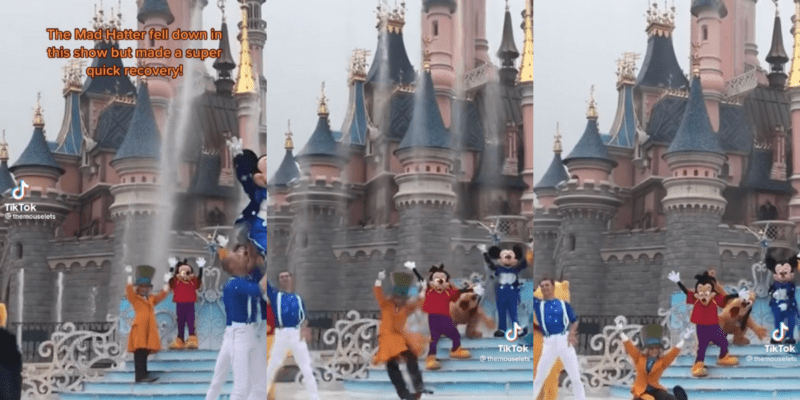 One of the most magical things Guests can experience when visiting Disney Parks is meeting their favorite characters. And now that character interactions have returned to normal; this experience will be even more magical for Guests.

Characters can be found at several locations throughout Disney Parks, but Guests can also spot them performing in the different shows and parades that happen on the day. Guests greatly anticipate these performances, and while they are meticulously prepared and rehearsed by Cast Members, there is always a possibility of an accident.

Related: Elsa Fails To “Let It Go” Due To Awkward Wardrobe Malfunction During ‘Frozen’

Recently, The Mouselets (@themouselets) posted a video on TikTok where viewers can see the Mad Hatter taking a massive and dangerous fall during what appears to be a Park opening performance in Disneyland Paris. The Mouselets mention the fall was due to the rain and wet stage, which is entirely possible, as Disneyland Paris often has unpredictable weather, like Walt Disney World.

Related: Disney Characters May End Up Fired If This Happens

The Mad Hatter continued with the performance, most spectacularly, never breaking character. It could even be said that the fall was a planned part of this performance. However, many viewers were afraid of a possible injury due to the nature of the fall and what can be seen in the video. Fortunately, this was not the case, as the beloved character can briefly be seen getting up before the video ends.

the mad hatter slipped in the rain in this show! #disneycast #disneyparks #disneyworld #disneysecrets #disneytiktok

the mad hatter slipped in the rain in this show! #disneycast #disneyparks #disneyworld #disneysecrets #disneytiktok

We have recently seen Disney’s Sequoia Lodge reopen while the Disneyland Paris Resort continues to undergo a refurbishment. On top of that, we have seen price increases for pins and, recently, even a stunning snowfall! The Disneyland Paris app has also changed; read more on that here. Disney Stars on Parade is also back at Disneyland Park now that the holidays are over! Guests looking to skip the line can also purchase Premier Access, a pay-per-ride system that allows Guests to skip the standby line.

Have you witnessed a wardrobe malfunction at Disney? Let us know in the comments below!