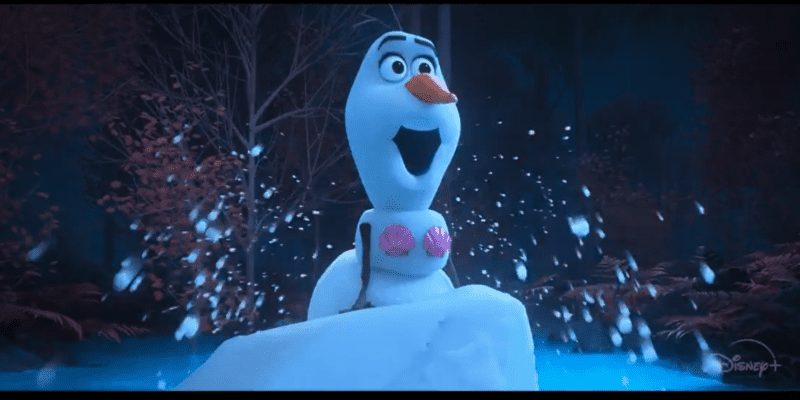 It’s almost time for something Frozen 2 (2019) fans have all been wanting, ever since we saw Olaf’s iconic scene in which he comedically recaps the first movie.

Disney+ Day, coming November 12, is only weeks away, and with it, Olaf’s very own Disney+ series!

Now, Disney has released a new trailer for Olaf Presents AND revealed some of the Disney Animated stories the snowman will be retelling.

Featuring in the 30-second trailer are scenes with Olaf dressed as beloved Disney characters, giving us hints as to which Disney classics the snowman will be re-enacting.

See the trailer below:

Some stories are worth melting for. Watch Olaf bring classic Disney Animation stories to life in Olaf Presents, a series of Disney+ Original Shorts, streaming #DisneyPlusDay, November 12 on @DisneyPlus

Mixing Disney Renaissance films and one of Disney’s biggest hit movies seems like a great idea, especially with how successful previous Frozen shorts have done on Disney+. Once Upon a Snowman (2020), Myth: A Frozen Tale (2020) and Frozen Fever (2015), moving to the streaming service on Disney+ Day, make up the large collection of Frozen shorts, alongside last year’s At Home with Olaf (2020), produced during the COVID-19 pandemic.

The series comes one year after Josh Gad took to Instagram to recap the Avengers: Endgame plot in Olaf’s voice, which received a ton of praise and hopes that Disney would make an entire series focusing on Olaf and his storytelling. Well, as Gad said — ask and ye shall receive!

In “Olaf Presents,” Olaf steps into the spotlight and goes from snowman to showman as he takes on the roles of producer, actor, costumer and set builder for his unique “retelling” of five favorite Disney animated tales in “Olaf Presents,” a series of new animated shorts from Walt Disney Animation Studios. The charismatic and versatile Olaf demonstrates his theatrical flair, taking on such iconic roles as a mermaid, a genie, a lion king (and most of the parts in between), as he entertains Arendelle with his delightful abbreviated versions of these beloved tales. Josh Gad returns to voice Olaf with veteran Disney animator Hyrum Osmond directing and Jennifer Newfield producing.

So grab your frozen treats and popcorn and get ready for Olaf Presents, coming this November, 12!

If you are not yet signed up for the streaming service, you can get started here.

The official description of the popular sequel reads:

Together with Anna, Kristoff, Olaf and Sven, Elsa faces a dangerous but remarkable journey into the unknown – to the enchanted forests and dark seas beyond Arendelle, in search of truths about the past.

Are you excited to see your favorite Disney movies retold by Olaf?

Comments Off on REVEALED: The Classic Disney Movies to Be Retold by Olaf in New Disney+ Series