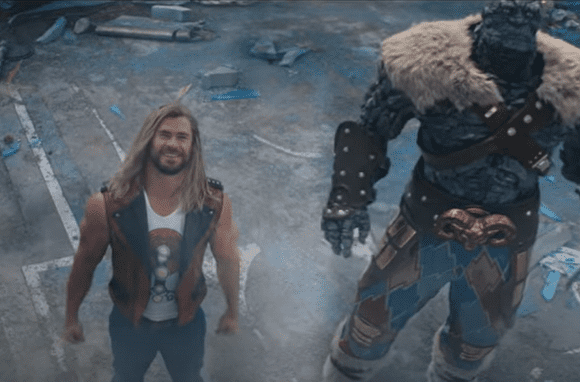 Despite having a shorter runtime than most MCU movies, Thor 4 manages to do quite a lot in a short amount of time. After hanging out on vacation with the Guardians of the Galaxy, Thor ends up trying to recruit some gods to take on Gorr the God Butcherer.

This leads him to go to the MCU’s version of Olympus — Omnipotent City. While at this grandiose city, Marvel fans get to see a lot of bizarre gods and meet Russel Crowe’s Zeus.

When Chris Hemsworth’s Thor calls out Zeus in front of the other gods at Omnipotent City, things don’t go well for the God of Thunder. He loses his clothes in front of everyone and for a split second, loses Korg.

When Korg breaks apart, Thor finds his friend’s face still intact and has Tessa Thompson’s Valkyrie protect him. With Valkyrie and Korg already being good friends, this feels very similar to a Star Wars moment. Marvel definitely recreated the moment after having Valkyrie lace her hair around Korg’s face to have him on the back of her head.

Star Wars fans will instantly be reminded of Star Wars: Episode V — Empire Strikes Back (1980) when Chewbacca carries C-3PO on his back after the protocol droid is dismantled by Ugnaughts. With some upbeat music, Valkyrie gets help from Korg to know which enemies to kill making this moment more like a parody of the Star Wars Bespin chase scene rather than a faithful recreation.

While it was fun seeing Korg be like C-3PO, Taika is currently working on the script for the next Star Wars movie meaning that fans might have to brace themselves for some crazy comedic adventure. Hopefully, Waititi doesn’t take the comedy too far as the MCU does, but fans will have to wait and see what the writer and director have planned.

Comments Off on ‘Thor: Love and Thunder’ Becomes A ‘Star Wars’ Parody For One Scene