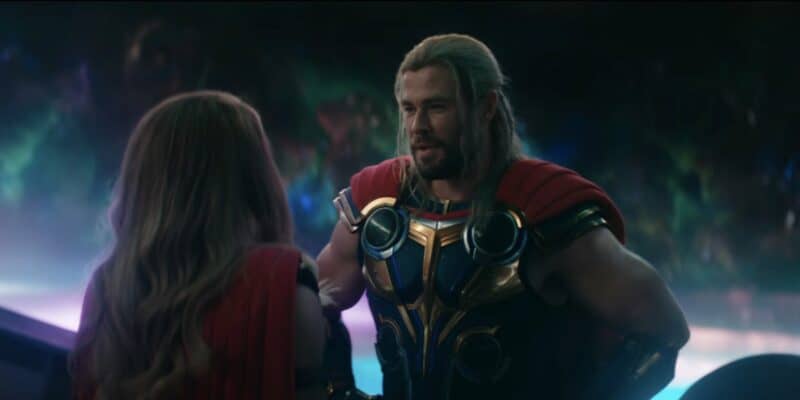 For some reason, Thor: Love and Thunder (2021) filmed a scene in a Best Buy parking lot.

Related: Marvel Star’s Mom Told Her All About Her Haters

With Thor 4 finally in theaters, fans can finally see what Chris Hemsworth’s Thor has been up to. With the fate of the universe hanging on a thread due to Christian Bale’s Gorr trying to kill all of the gods, things don’t look very good for the super hero.

Thor 4 makes history as the first super hero to get a fourth solo movie and the MCU movie doesn’t disappoint when it comes to humor and action. Even with a short runtime, Thor 4 manages to do a lot even if they introduce Jane as the Mighty Thor while also including the Guardians of the Galaxy.

In an interview with Entertainment Weekly, the actors shared some of their favorite moments while filming. This led to Natalie Portman sharing that one of the most stunning scenes in the movie was filmed in a Best Buy parking lot:

“There’s one scene that’s one of the most visually beautiful scenes I’ve seen on film, and we shot [it] in real life in a Best Buy parking lot,” Portman says with a laugh. “It’s so wild to be on this size of movie, and we were literally in a parking lot with a blue screen, doing this really dramatic thing. It looks so stunning on film, but every time I see it, I’m like, ‘That’s a Best Buy parking lot.'”

While Portman didn’t reveal why the crew had to film at a Best Buy parking lot, it’s very strange that this scene was a dramatic scene while also being memorable for how visually stunning the scene looked. Marvel got Taika Waititi to use the Volume, the visual effect stage that The Mandalorian and other Disney+ series have used for the movie, but apparently, this scene had to be shot elsewhere.

If you have seen the movie, what scene do you think was filmed at the Best Buy parking lot?