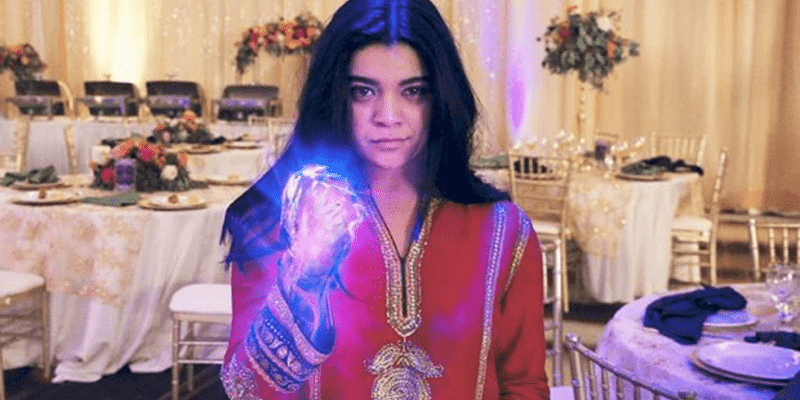 Ms. Marvel only has one episode left to air, and while most fans are enjoying newcomer Iman Vellani as Kamala Khan/Ms. Marvel, there were plenty who hated the show before they ever watched it. Iman Vellani is a rising star in the Marvel Cinematic Universe, and she already knows how to deal with the haters.

There are valid criticisms of Ms. Marvel with the controversial power change and decision to imply she is a djinn offending her Muslim fans. Kamala Khan is the MCU’s first Muslim superhero, and just by being a young woman of color, she is subjected to some of the worst Marvel fans on the internet. Ms. Marvel was review bombed; fans called the show “too woke” and overall reacted badly to the idea that Marvel Phase Four was not primarily about cisgender straight white men anymore.

Luckily, Iman Vellani is a huge comic book fan, so she had some idea of what to expect ahead of her debut in the MCU. Recently she checked in with NME to share how she deals with the hate she gets online. When asked about the negative reactions to Ms. Marvel, Vellani said:

“I know they’re there. It’s something we knew was going to happen going into this. It happened when the comic books came out in 2014. I’m all for constructive criticism as long as people have a legitimate concern or suggestion or something real. Then I care. But all the hatred I’ve seen has no basis, no merit, it’s just purely for the sake of hating – and that’s fine. You’re not gonna impress everyone. We hit our target audience and we hit an entirely new audience that didn’t know they were gonna fall in love with this character – people who have never seen themselves represented in a positive light before.”

Iman Vellani also said she does her best to avoid it all. She cares deeply for Kamala Khan and what she means to most people watching Ms. Marvel on Disney+. However, there seems to be a leak in her inner circle as Vellani shares:

“I’m not on social media. I hear things that my mother tells me though. It’s honestly quite laughable and I think change is scary for a lot of people. And having a show that surrounds a 16-year-old girl who’s Pakistani and Muslim and a superhero is scary for a lot of people. I think this is just gonna rip the Band Aid off and hopefully people will fall in love with her.”

Iman Vellani is far from the only female superhero in the Marvel Cinematic Universe that gets hate just for appearing on screen. Brie Larson (Carol Danvers/Captain Marvel) has been the target of much ire since her premiere in Captain Marvel (2018). Brie Larson is still suffering backlash from her call to increase diversity among critics during her acceptance speech for Crystal Award for Excellence in Film.

Brie Larson and Iman Vellani are currently filming The Marvels together. The Captain Marvel sequel is expected to hit theaters on July 28, 2023. Larson has been giving advice to her new costar, but Vellani may have some for the Marvel veteran on how to deal with the haters. She said:

“This show is for Marvel fans. If you’re a real Marvel fan, if any of those review bombers consider themselves a Marvel fan, then this show’s for them too. We wanted Ms. Marvel to be a love letter to Marvel fans. So yeah, I don’t care about them!”

Iman Vellani will return in The Marvels with Brie Larson and Teyonah Parris (Monica Rambeau from WandaVision).

Let us know in the comments if you think Iman Vellani’s mom should stop telling her about the negative reviews.