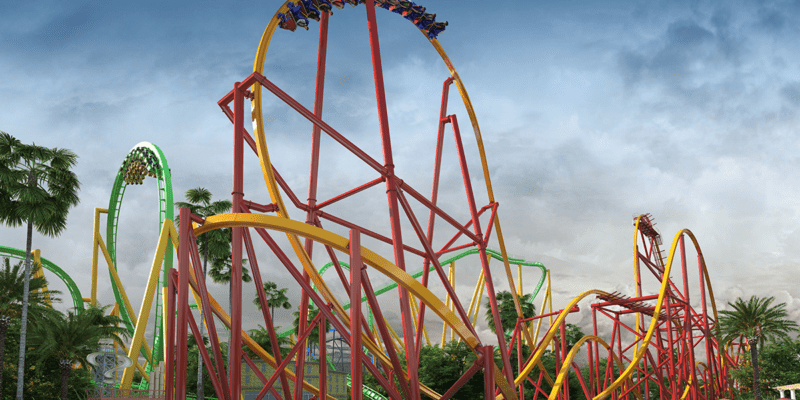 Six Flags is one of the most important theme park operators across the United States and even internationally. They compete with Disney Parks, Universal Studios, SeaWorld, and LEGOLAND.

We have recently seen Six Flags make tremendous efforts to continue improving its Parks across the country, with Six Flags Discovery Park in Vallejo, California, and Six Flags St. Louis, in Eureka, Missouri opening new thrilling attractions for Guests to enjoy. And over at Six Flags Fiesta Texas, a new groundbreaking roller coaster is being built at an impressive rate, which will surely provide Guests with a highly thrilling experience once it opens.

This new coaster will take Guests on a flight through the sky over 3,300 feet of track, towering 13 stories and soaring at speeds up to 58 miles per hour. WONDER WOMAN Flight of Courage will be the tallest and longest single-rail coaster on the planet, according to Six Flags, and will be Magic Mountain’s record 20th coaster. This new attraction will open on Saturday, July 16.

You can see a render of this new coaster down below.

Guests will be able to join forces with Wonder Woman in the flight for truth, justice, and equality, to embark on an incredible journey of heroic feats, propelling through dives, banks, rolls, and turns designed to challenge the bravest of thrill-seekers. The Park’s official website describes this new attraction as follows:

WONDER WOMAN™ Flight of Courage will be located in the six-acre DC UNIVERSE™ area of the park, which will be expanded and entirely remodeled to include a new, innovative restaurant and bar experience, plus retail locations featuring exclusive DC branded merchandise.

WONDER WOMAN™ Flight of Courage exemplifies the Super Hero’s traits of strength and speed—showcasing the legacy of WONDER WOMAN™ herself. As guests enter the ride queue, influenced by Greek architecture and featuring tropical landscaping, they will be immersed in the story of her life and how she obtained her super powers.

This new coaster will provide Guests with a uniquely thrilling experience when they visit the Park, and we can’t wait to experience it ourselves.

Are you excited to ride WONDER WOMAN Flight of Courage? Let us know in the comments below!

Comments Off on Six Flags to Make History With New Roller Coaster Opening This Month!