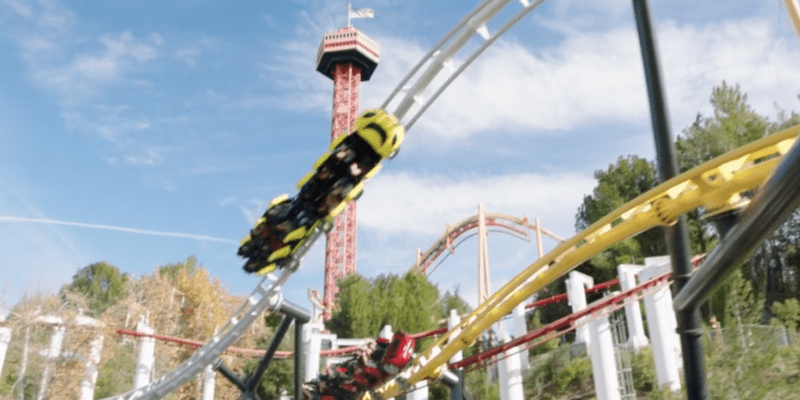 Could you imagine paying $150.00 to eat for a full year? What if we told you it also meant going to a theme park every day to get that food? One man lived up to the challenge and saved thousands of dollars.

In 2020, the average cost of groceries was $4,942, with an average of $412.00 per month. This does not include the cost of eating out or ordering in, which can easily raise this cost by a couple of thousand more. Paying for food is incredibly costly, so that is why Dylan chose to take advantage of an amazing deal Six Flags Magic Mountain was offerings. Although not currently available, Dylan purchased a $150.00 pass, for an annually renewable pass to the park, which included free parking and two meals any time you enter.

It seems Dylan has the ability to renew this deal every year, which has left him spending almost $0 on food. Dylan works near Six Flags Magic Mountain so he tends to go there for lunch, and on the way home, stops by the theme park as well to pick up some dinner. Dylan was asked about his new meal routine:

“That entire first year, I don’t think I ever went to the grocery store,” he says. “I timed it so I was able to go there during my lunch break, go back to work, then stop back for dinner on my way home.”

He claims to have kept this up for years and: “Maybe that sounds outlandish, but after just seven years of daily meals at the theme park, Dylan paid down his student loans, got married and bought a house.”

Dylan is now 33, married, and working, and no longer uses the pass on a daily basis, however, he did note that he still has it, and it works!

As we have reported, the theme park is implementing a new Flash Pass, which is a pay per ride system that will cause Guests to pay an extra fee on top of the ticket price in order to skip the line for certain attractions.

This change was put in place shortly after Disneyland Resort introduced Disney Genie, which has a Disney Genie+ and Lightning Lane option for Guests to do the same. As Disney is normalizing this pay-per-ride system, we can now see that other theme parks are starting to follow suit. Now, the Los Angeles Daily News has reported that a coaster will be leaving the theme park so that the DC-themed Wonder Woman attraction can take its place.

The Flash: Speed Force ride was removed as part of the remodel of the DC Universe and construction of the Wonder Woman Flight of Courage coaster, according to Magic Mountain officials.

Wonder Woman Flight of Courage will be a single-rail coaster. Guests who hop aboard will straddle the monorail track and experience the tallest and longest coaster of its kind in America.

The new DC coaster will join the DC Universe section of the Park, and will introduce a new gift shop and dining location. It will be interesting to see if the spinning attraction, Wonder Woman Lasso of Truth, in the same section will have to undergo a retheme due to the new Wonder Woman coaster. The queue for the coaster will be a storytelling adventure, where Guests can see how Wonder Woman harnessed her powers.

It seems that the attraction is expected to span from the “DC Universe area of the park to Metropolis Plaza near the Justice League 3-D dark ride. The new ride will be flanked by a pair of DC Comics-themed coasters: Riddler’s Revenge and Batman: The Ride.” Guests looking to dine in the area can enjoy food from Kent Farm Roasted Corn, Smallville Frozen Lemonade, or Teen Titans Tower Pizza.

Would you pay $150.00 for an Annual Pass to Six Flags Magic Mountain, which included meals?