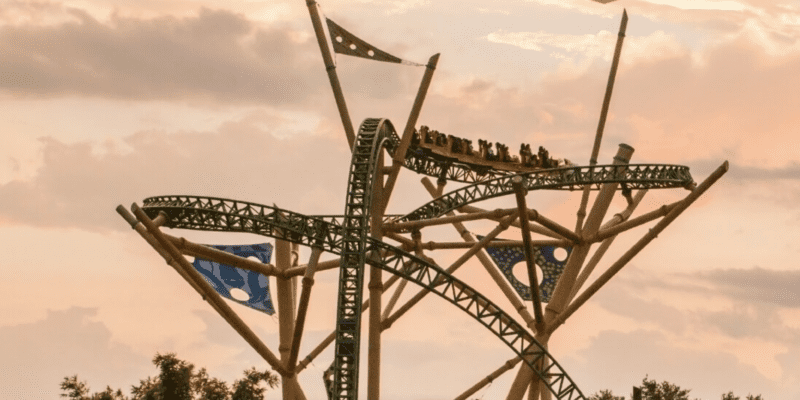 On a roller coaster, however, things change.

Yesterday, Busch Gardens Tampa gave their Guests under 10 minutes of warning to announce that the Park would be closing early. The weather was sitting at 51 degrees, along with rainfall and fog. Busch Gardens Tampa ended up closing at 2:15 p.m., instead of the listed 5:00 p.m. closing time that was listed on their schedule. It was not noted if Guests who purchased a day ticket were compensated for the early closure.

That being said, once the Park closed it seemed that Cheetah Hunt, one of the popular coasters at Busch Gardens Tampa, ended up getting “stuck in a tree”! Ride expert Midway Mayhem (@Midway_Mayhem) caught footage of the coaster valleyed at the top of the figure eight of the coaster, which is actually part of the logo for Busch Gardens.

Looks like @BuschGardens has a Cheetah stuck in a tree…

Not something I’ve seen before with Cheetah Hunt, it valleyed at the top of the figure 8.

Bad weather forced the park to close earlier today at 2:15.

Looks like @BuschGardens has a Cheetah stuck in a tree…

Not something I've seen before with Cheetah Hunt, it valleyed at the top of the figure 8.

For a better look at the coaster stuck at the top of the tracks.

Another view of Cheetah Hunt valleyed.

We visited the Park last week as well, and noticed that Cheetah Hunt broke down as we were trying to get in line and remained closed for the rest of the evening while test runs were occurring with the coaster. Luckily, in the photo above, we can see that the coaster is seemingly empty so Guests were not stuck amid the bad weather.

At the moment, there is a lot going on with Busch Garden Tampa! Their Mardi Gras festival is underway, where Guests can enjoy performers, live music, and multiple food booths. Busch is currently underway with their “free beer” promotion which is running through to January 31. At Busch Gardens, only pass members, and Fun Card holders can grab their pour at Garden Gate Café.  On March 11, Iron Gwazi will return to Busch Gardens as an all-new hybrid coaster, mixing steel and wood for one wild ride. The Park has a ton of other thrill rides Guests can enjoy, such as Tigris, Cobra’s Curse, SheiKra, Falcon’s Fury, Kumba, Serengeti Express, Scorpion, SandSerpent, Stanley Falls Flume, Air Grover, and Wild Surge.

Are you a fan of Busch Gardens Tampa? Have you ever been stuck on a coaster before?