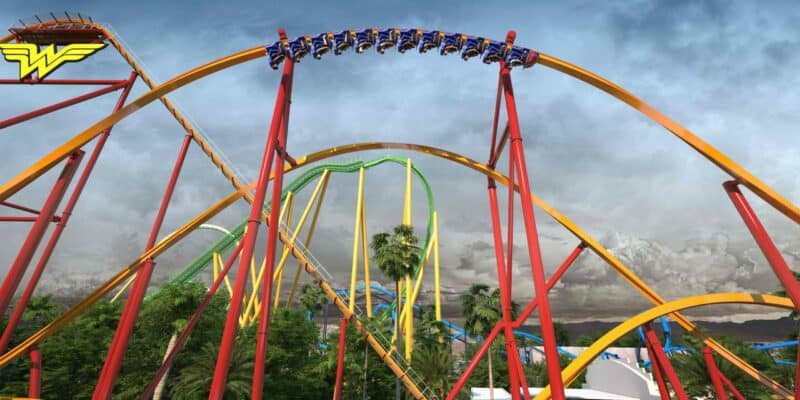 If you are a fan of Six Flags Magic Mountain in California, you likely know that there are a lot of changes going on at the theme park at the moment.

As we have reported, the theme park is implementing a new Flash Pass, which is a pay per ride system that will cause Guests to pay an extra fee on top of the ticket price in order to skip the line for certain attractions.

This change was put in place shortly after Disneyland Resort introduced Disney Genie, which has a Disney Genie+ and Lightning Lane option for Guests to do the same. As Disney is normalizing this pay-per-ride system, we can now see that other theme parks are starting to follow suit. Now, the Los Angeles Daily News has reported that a coaster will be leaving the theme park so that the DC-themed Wonder Woman attraction can take its place.

The Flash: Speed Force ride was removed as part of the remodel of the DC Universe and construction of the Wonder Woman Flight of Courage coaster, according to Magic Mountain officials.

Wonder Woman Flight of Courage will be a single-rail coaster. Guests who hop aboard will straddle the monorail track and experience the tallest and longest coaster of its kind in America.

The Flash: Speed Force was built in 1974 and has undergone a ton of name changes at Six Flags Magic Mountain — some of which were Himalaya, Subway and Atom Smasher. Six Flags describes the coaster as:

THE FLASH is the fastest man alive! Watch him zoom past you in a blur of red and gold. Forged by lightning, THE FLASH can run faster than the speed of light, and now you can too! THE FLASH Speed Force is part of the hyper colorful DC Universe. Now you can see the world through THE FLASH’s eyes as a whizzing blur of color and light!

A blazingly fast seated ride around a circular track will take you to the turbo-charged speed of THE FLASH’s world. But just going round in circles isn’t enough – THE FLASH added a wave to it to create an inter-dimensional centrifuge that will spin you out of this world.

Jump into your seat and get ready to accelerate full tilt until everything is a streaky, blurry, smear of light. Now you know how THE FLASH feels! You’re moving so quick the centrifugal force will squeeze you right to the edge of your seat, whirling around like an atom smasher… except this time the atom is you!

Plans for the coaster will be announced at a later date, according to The OC Register.

The new DC coaster will join the DC Universe section of the Park, and will introduce a new gift shop and dining location. It will be interesting to see if the spinning attraction, Wonder Woman Lasso of Truth, in the same section will have to undergo a retheme due to the new Wonder Woman coaster. The queue for the coaster will be a storytelling adventure, where Guests can see how Wonder Woman harnessed her powers.

It seems that the attraction is expected to span from the “DC Universe area of the park to Metropolis Plaza near the Justice League 3-D dark ride. The new ride will be flanked by a pair of DC Comics-themed coasters: Riddler’s Revenge and Batman: The Ride.” Guests looking to dine in the area can enjoy food from Kent Farm Roasted Corn, Smallville Frozen Lemonade, or Teen Titans Tower Pizza.

Six Flags described the attraction as:

Six Flags Magic Mountain’s record 20th coaster—the most at any theme park in the world—WONDER WOMAN™ Flight of Courage will debut Summer 2022 as the tallest and longest single-rail coaster on the planet. Riders will fly single file through the sky over 3,300 feet of track, towering 13 stories and soaring at speeds up to 58 miles-per-hour.

WONDER WOMAN™ Flight of Courage will be located in the six-acre DC UNIVERSE™ area of the park, which will be expanded and entirely remodeled to include a new, innovative restaurant and bar experience, plus retail locations featuring exclusive DC branded merchandise.

WONDER WOMAN™ Flight of Courage exemplifies the Super Hero’s traits of strength and speed—showcasing the legacy of WONDER WOMAN™ herself. As guests enter the ride queue, influenced by Greek architecture and featuring tropical landscaping, they will be immersed in the story of her life and how she obtained her super powers. Riders will join forces with WONDER WOMAN™ in the fight for truth, justice, and equality, to embark on an incredible journey of heroic feats, propelling through dives, banks, rolls, and turns designed to challenge the bravest of thrill seekers.

The coaster is set to debut in summer of 2022, after experiencing a COVID delay for the 2021 opening date.

What do you think of the DC Universe that is forming at Six Flags Magic Mountain? Let us know in the comments below.