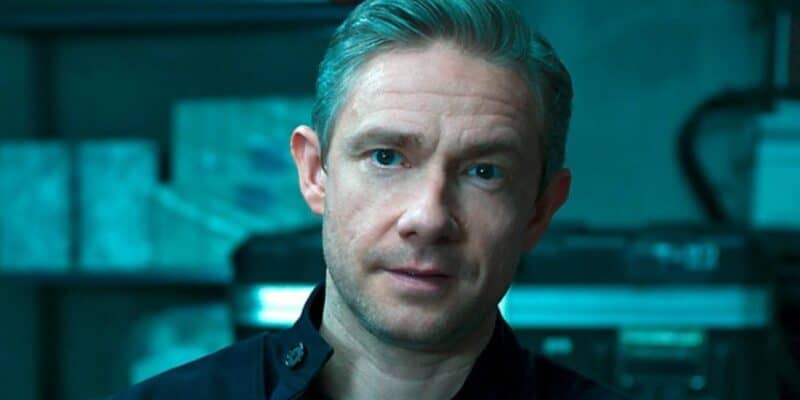 The Marvel Cinematic Universe is the gift that keeps on giving. While Thor: Love and Thunder (2022) smashes its way through the global box office like a giant hammer, there’s just as much happening on the Disney+ side of things, as the smaller side of the MCU continues to grow.

But now, yet another character from the more “cinematic” side of the MCU is set to return for the upcoming live-action show. In a recent interview with RadioTimes.com, actor Martin Freeman talked about his character Everett K Ross, and the possibility of his return.

When discussing his alleged involvement, The Hobbit actor said the following:

“Yeah — I think that’s kosher information, isn’t it? In order not to embarrass Samuel [L Jackson], I will say… I’m not gonna say he’s got that totally wrong and he’s thinking of Sam Rockwell. So yes, I may very well be [appearing].”

Martin Freeman made his debut appearance in the MCU as Everett K Ross in Captain America: Civil War (2016), and again in the Oscar-winning Black Panther (2018). He has also been confirmed to be appearing in Black Panther: Wakanda Forever (2022).

Everett K Ross is a member of the CIA’s “Joint Counter Terrorism Center”. Freeman has previously described Ross as someone who “works for the American government … [and] works in conjunction with the superheroes, and certain agencies that help to tame the superheroes’ power.”

Whether or not Martin Freeman’s character will have a prominent role in The Secret Invasion remains to be seen, but his return will certainly offer some connective tissue between the Disney+ shows and the wider Marvel Cinematic Universe.

The Secret Invasion is based on the Marvel Comics series of the same name. As per Wikipedia, here is the synopsis for the comic book series:

The story involves a subversive, long-term invasion of Earth by the Skrulls, a group of alien shapeshifters who have secretly replaced many superheroes in the Marvel Universe with impostors over a period of years, prior to the overt invasion.

Related: ‘Black Panther 2’ Will Erase Villain’s Heritage to “Fit In the New World”

The Skrulls feature heavily in Captain Marvel (2019), in which Carol Danvers/Captain Marvel (Brie Larson) is caught in the middle of a battle between her own people and the alien race. Ben Mendelsohn made his debut in the film as Talos, who turns out to be an ally of S.H.I.E.L.D.

However, Marvel President Kevin Feige has confirmed that The Secret Invasion won’t have as large a scope as its comic book series-counterpart, saying that there are more characters in the comic book series than there are in Avengers: Endgame (2019).

There is currently no release date for The Secret Invasion. But we do know that the show will consist of six episodes and forms part of Phase Four of the MCU.

Marvel newcomers Michaela Coel and Tenoch Huerta (rumored to be Namor) have been cast in undisclosed roles.

Are you excited to see The Secret Invasion? Let us know in the comments down below!