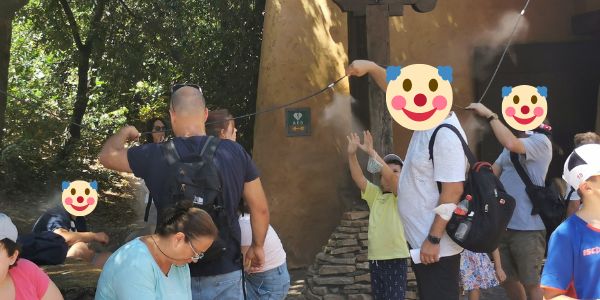 Some Guests chose to rip off a few installations at a Disney Resort recently so they could more accurately spray themselves with water.

The entire world is going through an intense heatwave currently, with millions of people doing everything they can to stay cool. We recently saw Disneyland Paris install hoses that spray water throughout the Resort. These hoses were put in place to deal with the intense heat that Paris is currently facing. The weather has proven so severe that multiple attractions were closed because of it.

Unfortunately, some Guests feel like they could do as they please with these new installations. This was revealed in a tweet from ED92 (@ED92Magic):

Some guests considering that the misters are too high up have decided to simply rip them off 😡 pic.twitter.com/zAXTqMa9NF

As you can see, Guests have now ripped these hoses off of where they were installed so they could more accurately use them. This is, unfortunately, far from the first time we have reported on Guests trespassing and “doing as they please” at the Disneyland Paris Resort.

The opening of Avengers Campus in the Parisian Park is part of a multi-year expansion project that will include Frozen and possibly Star Wars-themed areas. We recently saw massive cranes carrying out the initial construction tasks for the next big project at Disneyland Paris, a Frozen-themed expansion. You can read more about this development here.

How are you dealing with the intense heat?