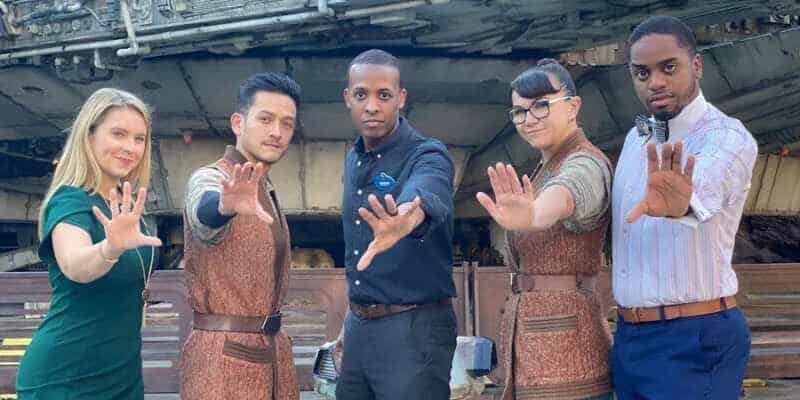 One of the most magical experiences Guests can have while visiting Walt Disney World Resort is meeting and interacting with their favorite Disney characters. Meeting Mickey and Minnie Mouse, Goofy, Donald, Chip and Dale, Winnie the Pooh, Captain Jack Sparrow, Chewbacca, Kylo Ren, and many more can create an emotional and memorable moment for the young and the young at heart.

However, Guests must never forget that their favorite character deserves the same respect as anyone in the Park.

We recently reported on a viral video in which a Guest forcefully hugs a Stormtrooper after being rejected by Kylo Ren and a first Stormtrooper, before being forced away by the character attendant walking along with the group of Star Wars characters.

Recently, a former Cast Member uploaded a response to the viral video, and everyone needs to hear his reaction.

In a video posted on TikTok by Dapper Manatee (@dappermanatee), he describes the scene in the video before saying, “you might be thinking ‘it’s Disney, why can’t he just hug him? Hugs are good.’ Well, if you’re thinking that, you’re wrong.” This may be a thought on the heads of many, as Disney Parks are known to be the happiest and most magical places on Earth, but Dapper Manatee makes a fair point by saying that Guests shouldn’t just hug Disney characters.

“You know what’s good? Consent,” Dapper Manatee then says. “I love consent. Ask my consent for a hug, don’t just hug me. So warm and fuzzy, just wrap me up in some consent,” he adds humorously, adding to his point and explaining why this Guest was wrong to hug the Stormtrooper forcefully.

Dapper Manatee ends his video reiterating, “DO NOT touch the Cast Members! Not your right! Hands to yourself!”

You can see the video below or click here to see it.

It is important to state that Guest should respect Cast Members and stick to certain conduct while visiting the Park, asking for permission before touching or taking a photo with a Disney character, not interfering with performances, not engaging in disruptive behavior, etc., regardless of their age, as they could potentially cause an accident endangering themselves, Cast Members and other Guests.

Proof of this was a previous incident in which a kid ran into the parade route and let go of his balloon, which got caught on the leg of Merida’s horse, causing him to get spooked and act erratically. Fortunately, Cast Members were able to handle the situation preventing any injuries, but the experience was terrifying for Guests and Cast Members alike.

Disney Cast Members undergo a series of training processes to provide Guests with the best experience while visiting the Park. This includes being trained to be as positive and friendly as possible to both the young and the young at heart. However, there is still a set of rules and regulations that Guests must comply with, and Cast Members must enforce to keep Disneyland Park and all Disney Parks safe for Guests to enjoy.

Guests need to be aware of the rules and regulations that Disney World sets out before arriving, as breaking them could result in being kicked off property, banned for life, or in some instances, arrested.