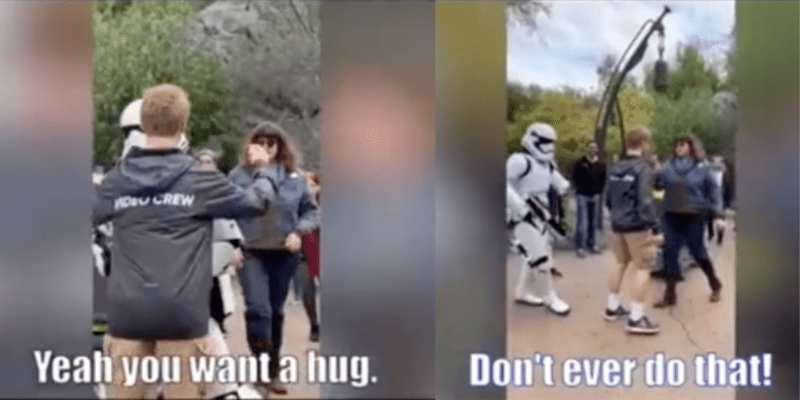 Hugging your favorite Walt Disney World character is the highlight of a Disney Parks vacation for many Guests. Disney prides itself on the realistic portrayals of its characters so that Guests of all ages can be fully immersed in the magic of their favorite Disney or Star Wars film.

Sometimes though, that commitment to accuracy means some characters aren’t quite as friendly as others. It makes sense that a villain isn’t as personable as a princess!

In the video, the Guest walks up to Kylo Ren (also known as Ben Solo) and asks if he wants a hug. Kylo says “No,” and continues walking. Two Stormtroopers and a character attendant Cast Member follow him.

Next, the Guest says, “How about you?” to one of the Stormtroopers, who ignores him and keeps walking.

“You want a hug,” the Guest says to the next Stormtrooper and forcibly envelopes them in a hug. The character attendant Cast Member guides the Guest away from the characters.

“Don’t ever do that!” the Stormtrooper says to the Guest and the character attendant forces the Guest to walk away.

Although Walt Disney World character performers are there to entertain Guests, it’s important to be respectful and ask for permission before touching or taking a photo with a Disney character.

If you’re unsure about a character interaction, you can always ask a nearby character attendant Cast Member if a certain interaction is appropriate.

Related: Adam Driver “Not Against” Returning to ‘Star Wars’ Franchise

Have you ever hugged Kylo Ren at Disneyland or Walt Disney World? Share your experience in the comments.