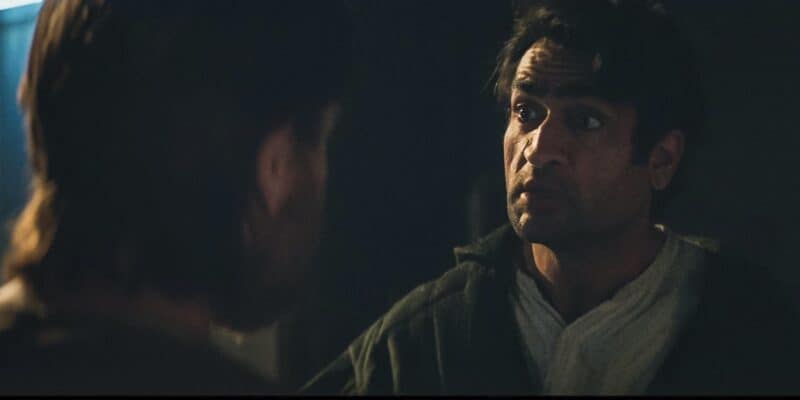 In Episode 2 of the series, fans saw Kumail Najiani’s Haja who is a con man disguised as a Jedi. Ewan McGregor’s Obi-Wan hides in the shadow and watches the con man help a family escape for the right price. While this scene does convince Kenobi that Haja isn’t a Jedi, the scene also introduces fans to a beloved character from Legends. Corran Horn.

The little boy seeking safe passage that is force sensitive is confirmed in the credits to be Corran and his mother is also listed as Nyche which means that Star Wars isn’t teasing fans, but is actually setting up Corran to have a role in the Star Wars universe. One fan shared that the credits for the episode confirmed the boy was Corran:

Later on in Episode 3, when Kenobi is looking at the walls of the safe room used by Indira Varma’s Movement, Obi-Wan passes by another name, Valin Halycon which was Corran’s father. With fans shocked to hear Quinlan Vos is alive, it’s no surprise that many fans probably miss this small moment.

One interesting thing is that Corran might be the leading character for the new Rogue Squadron movie. Normally, the leading pilot would be Wedge Antilles, but Star Wars has made it clear that they don’t plan to do much recasting for Original Trilogy characters. An easy solution would be to introduce another member from Rogue Squadron as the leader and Corran Horn is the perfect option.

Corran grew up on Corellia in Legends before being taken off-world right after the Battle of Endor to avoid the Imperials. It seems that in Canon, Horn will leave Corellia as a child and end up being in hiding for some time. Most likely, Star Wars will keep Horn as one of the New Republic’s best pilots and is then reassigned to Rogue Squadron to help fight the Imperial Remnant.

Yet, Horn isn’t just a pilot. His grandfather was a Jedi Master and so he has force abilities. Luke Skywalker reveals this to Corran after he learns more about the Jedi Order. Corran then balances his duties to the New Republic and to the Jedi Order making him an interesting character.

With Rogue Squadron supposedly releasing in the next few years, fans are wondering what other characters from Legends will end up in the movie. Star Wars has done a great job bringing characters into canon such as Grand Admiral Thrawn. While the Jedi Order hasn’t been shown to be created by Luke Skywalker yet, Rogue Squadron might be the first time fans can see Luke’s Jedi Temple which will definitely be exciting since the Sequel Trilogy failed to show any Jedi.