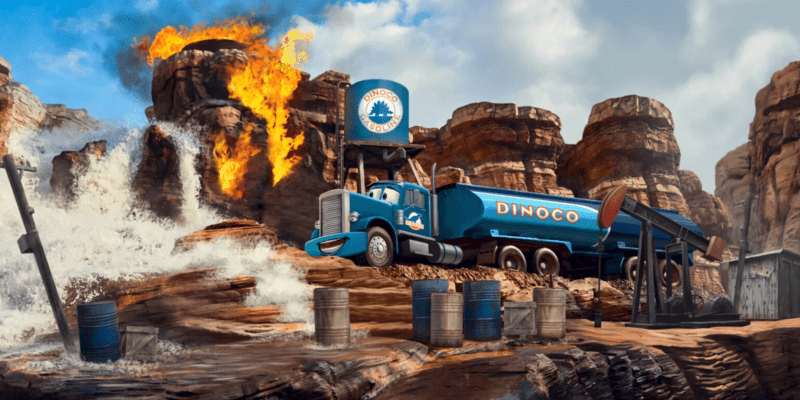 Meeting their favorite characters is perhaps one of the most magical experiences Guests can have while visiting a Disney Park. Meeting Mickey and Minnie Mouse, Goofy, Donald, Chip, and Dale, Winnie the Pooh, Captain Jack Sparrow, Chewbacca, Kylo Ren, and many more can create an emotional and memorable moment for the young and the young at heart.

However, meeting a new Disney character may not be as magical as one would expect them to be.

Maria Mondloch (@MariaMondloch) recently posted a video on Twitter in which one concerned Guest keeps screaming “he’s dying!” at the top of their lungs while everyone around laughs at a Disney character. However, even if other Guests had been as concerned as them and decided to help, there isn’t much they could’ve done, especially since Guests are not allowed to exit the bus from which this video was taken.

You’re all laughing. This truck is dying and you’re laughing.

You’re all laughing. This truck is dying and you’re laughing. pic.twitter.com/caBnDMPj6n

While this Guest’s concern is understandable, as we can see a sentient truck from the Cars franchise catching fire, the scene takes place under controlled conditions, meaning neither the Guests nor the truck were in any real danger.

This hilarious video was taken from the bus that drives Guests through Cars Road Trip, an attraction in Disneyland Paris which, in a genuinely Universal Studios Tour fashion, has a scene in which a truck catches fire, only to be put out by a flash flood, providing Guests with a fun and thrilling experience.

The official Disneyland Paris website describes the attraction as follows:

Rev your engine for a cruise along the most legendary highway and snap a pic of stunning nature-made and Cars-made sights.

Cruz Ramirez and Sally Carrera do! And they’re here to steer you through today’s tour. Pay attention, sit tight, and get your camera ready for the nature-made and Cars-made sights you’re about to see and experience.

First stop: A nutty roadside attraction Snap a pic and don’t forget to wave to Lightning (Flash) McQueen, Luigi, and Guido at the World’s Largest Lugnut.

Second stop: Power shower! There’s nothing like a natural carwash in a flash flood for some extra shower power. See how a huge water tanker likes to shake up his cleaning routine in Cars-tastrophe Canyon.

Final Stop: An Artistic Mater-piece! Mater is well known for his impressive junkyard creations. Today he’s debuting his latest Mater-piece– can you guess what it is? Honk if you love this motor monument!

Disneyland Paris is currently celebrating it’s 30th-anniversary, bringing Guests buckets of Disney magic across Disneyland Park, Walt Disney Studios Park, and Disney Village. Despite new shows like Disney D-light — the drone pre-show to the Disney Illuminations fireworks — and character cavalcade such as Dream… and Shine Brighter! in front of Sleeping Beauty Castle, perhaps the most enticing aspect of the three-decade celebration is the opening of Disney Parks’ second Avengers Campus, which will welcome new recruits for the first time on July 20.