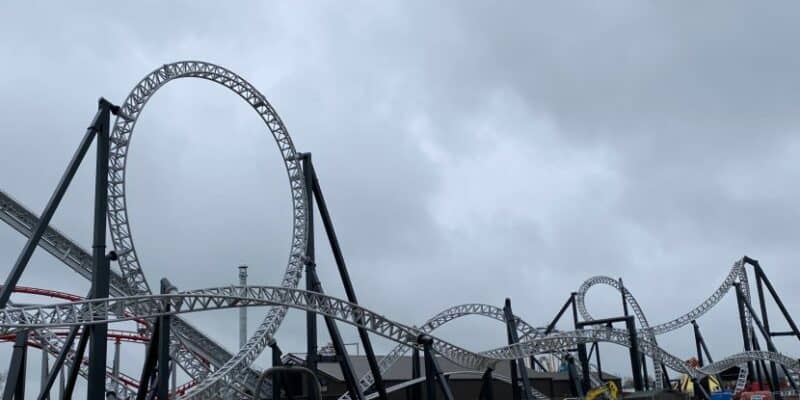 Experiencing a roller coaster for the first time is probably one of the most thrilling and exciting experiences a Guest could have, and while seeing themselves involved in an accident is the last thing going through their minds, there is always a possibility that something unexpected could happen, especially when riding a high-speed roller coaster.

For that reason, theme Parks worldwide have strict rules and regulations to ensure Guests’ safety as they visit the Park. This includes several tests to ensure roller coasters function correctly, with carts staying on the tracks and safety restraints properly securing Guests for their experience.

Of course, not all tests will ensure a perfect riding experience on the first try. After all, that is what tests are for, but recently, one theme Park had a hilarious malfunction while testing their upcoming roller coaster.

The video was shared by European Coaster Club (@coasterclub) on Twitter, showing one of the test runs for Flamingo Land’s upcoming roller coaster, Inversion. In the snippet, we can see the carts approaching a series of inversions before having one of the water dummies fly out of the cart and all the 23 remaining dummies flying out as well by the fourth inversion.

You can see this snippet down below or click here to watch the full video posted by Go Theme Parks on YouTube.

This went well for @flamingolanduk …

After being shared, the video quickly gained popularity, with many people speculating why the water dummies flew out of the attraction. Into The Brake Run (@IntoBrake) commented this had happened because the dummies used by the Park were not designed to be used on roller coasters with lap bar restraints.

If you haven’t seen the footage of Flamingo land testing their new 10 inversion coaster with the water dummies in for the first time due to the wind, then here’s what happened when they did…

If you haven't seen the footage of Flamingo land testing their new 10 inversion coaster with the water dummies in for the first time due to the wind, then here's what happened when they did…

Corporate Emo (@Antin0s) added to the conversation, pointing out that the attraction is completely safe, as its design has been copied and used on numerous attractions worldwide, and confirmed that this incident happened simply because the wrong water dummies had been used for testing.

I chuckle every single time I see this video

The ride is completely safe – it’s been cloned numerous times and the train design has been used on plenty of other rides. Flamingoland simply used the wrong water dummy for testing.

I chuckle every single time I see this video

The ride is completely safe – it's been cloned numerous times and the train design has been used on plenty of other rides. Flamingoland simply used the wrong water dummy for testing. https://t.co/Tx4dPC9Kd6

Inversion will be Flamingo Land’s newest roller coaster. Originally scheduled to open in 2020, the attraction was delayed due to the Covid-19 pandemic and pushed back until summer 2022. The £20 million thrill ride will feature 10 inversions through over 2800 feet of track, reaching speeds of over 50 miles per hour and taking 24 daring Guests on a 108 feet high journey.

This coaster was initially manufactured by Intamin for Hopi Hari Theme Park in Brazil, but due to financial problems from the Brazilian Park, the coaster had to be sold after being in storage for several years, making its way to Flamingo Land for thrill-seekers to enjoy.

The Park is also home to a zoo with over sixty species of animals, between mammals, farm animals, birds, reptiles, amphibians, and fish. Flamingo Land’s zoo also offers some exclusive animal interactions and experiences, as well as educational activities and talks.

Enjoying the different dining offerings, entertainment, roller coasters, and attractions at any theme Park is a fun experience for the entire family. Whether it be Disneyland Resort, Walt Disney World Resort, Universal Studios Hollywood, Universal Orlando Resort, Busch Gardens, SeaWorld, LEGOLAND, or any other, theme Parks are some of the most popular destinations worldwide.