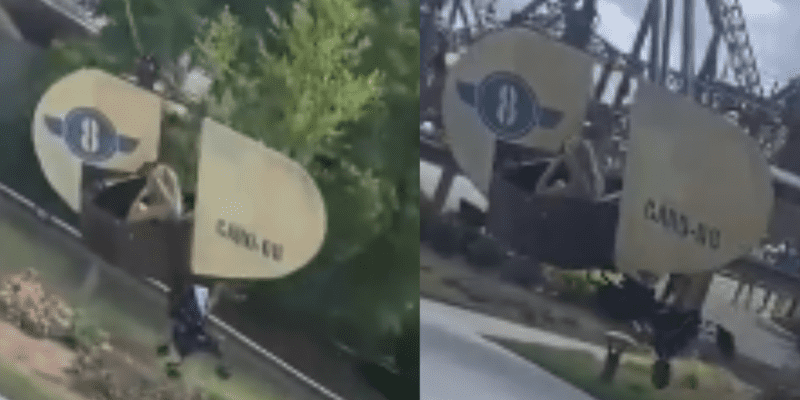 Theme Parks all across the country are welcoming back record numbers of Guests after a couple of rough years due to the COVID-19 pandemic.

Walt Disney World Resort and Disneyland Resort reported more than $7 billion in revenue from Disney Parks & Experiences in the last quarter and we’ve also seen other theme parks like Universal Orlando Resort, Universal Studios Hollywood,  SeaWorld, and Busch Gardens have attendance numbers climb to similar rates of that prior to the pandemic.

A popular theme park in the southeastern portion of the United States is also gearing up for a big season.

While it’s certainly an exciting theme park to attend, that doesn’t mean that mishaps can’t happen.

TikTok user @Parkineer recently posted a video where a stroller was caught on a swinging attraction at Carowinds.

A stroller got caught on this ride at Carowinds. video posted with permission from @heatherbaker11

A stroller got caught on this ride at Carowinds. video posted with permission from @heatherbaker11

As you can see in the video above, the stroller becomes hooked on the ride and is swinging dangerously in the air with a child in the cart above. It eventually makes contact with one of the markers below and that knocks it loose. We can also see in the video that the ride came to a stop after this point.

The ride is called Mountain Gliders and Carowinds official description of the attraction reads:

Have you ever wanted to soar like a bird over majestic mountains? The Mountain Gliders offers an experience that’s mighty close. After boarding one of the unique carriages, you’ll start spinning at a high speed, so much so that you’ll spin outward and rise to 28 feet above the ground. Once in the air, you take matters into your own hands by operating the carriage’s controls to command the glider’s flight.

Whether you explore the high altitudes as if flying above the Blue Ridge Mountains or cruise at a lower elevation in the valleys, the choice – and experience, mild or wild – is up to you.

Theme park rides that swing like this can’t simply come to a complete stop once a stoppage is needed. They slow down and finish out the rotation so that Guests remain safe during the stoppage. The Team Members did a great job of keeping everyone safe and getting the ride to a stopping point after the stroller broke free in what could’ve been a very dangerous situation.

Carowinds tickets start as low as $45.00 and the amusement park has an on-site hotel in the all-new SpringHill Suites Charlotte and a 55-acre on-site cabin and RV park named Camp Wilderness that is open year-round.

The parent company of Carowinds Cedar Fair. Recently, SeaWorld Entertainment Co. made a multi-billion dollar offer to purchase Cedar Fair, however that bid was rejected.

Let the expert team at Academy Travel help you plan your next magical vacation to Disney World’s water parks, four theme parks — Magic Kingdom, EPCOT, Disney’s Animal Kingdom, and Disney’s Hollywood Studios — and the Disney Springs shopping and dining district! Or, how about a trip to Disneyland Resort to enjoy Disneyland Park and Disney California Adventure, as well as the Downtown Disney shopping and dining district? No matter what Disney Park, you’re sure to have a magical vacation!