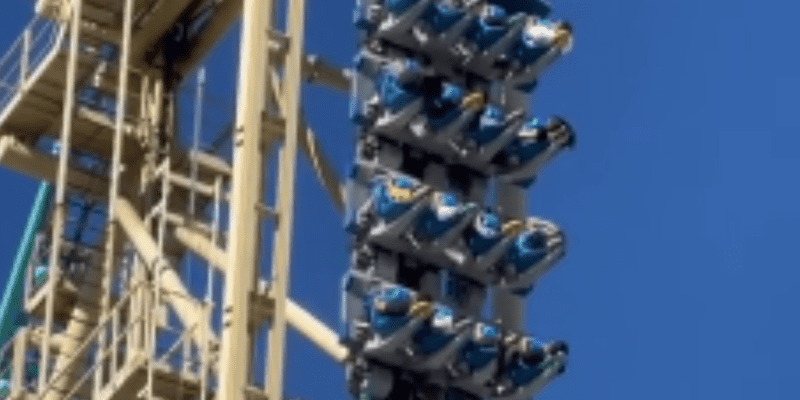 Theme Parks all across the country are welcoming back record numbers of Guests after many rough years over the course of the pandemic.

Walt Disney World Resort and Disneyland Resort reported more than $7 billion in revenue from Disney Parks & Experiences in the last quarter and we’ve also seen other theme parks like Universal Orlando Resort, Universal Studios Hollywood,  SeaWorld, and Busch Gardens all see their attendance numbers begin to climb to heights similar to that of pre-pandemic times.

As everyone is making their way back to theme parks, TikTok user @thecrashz3ro recently shared a relatively frightening video of Guests at Knott’s Berry Farm, located in Buena Park, California, suspended in the air as the roller coaster stopped on its tracks.

As you can see in the video, these Guests are stopped almost at the top of the massive hill. They reportedly were broke down for 10 minutes before the ride resumed operations normally. Of course, Knott’s Berry Farm Team Members have been trained on what to do in the case of a problem like this and they ensured the safety of the riders throughout the incident.

Coincidentally enough, the incident happened on the roller coaster dubbed “Hangtime.” The roller coaster towers 150 feet over the Boardwalk area and boasts the steepest vertical drop in California. This gives a whole new meaning to hang time.

It should be noted that the ride does have a mechanism to suspend Guests for just a few extra seconds, but that is supposed to happen right before they take the plunge and after they’ve climbed the hill, rather than where we see the attraction suspended in the video.

HangTime, the first and only dive coaster in California, is now open at Knott’s Berry Farm!  HangTime towers 150 feet over the Boardwalk area showcasing a beyond vertical drop that is the steepest in California, gravity-defying inversions, and mid-air suspensions.

The parent company of Knott’s Berry Farm is Cedar Fair. Recently, SeaWorld Entertainment Co. made a multi-billion dollar offer to purchase Cedar Fair, which could mean major changes for the California theme park, as well as 12 other Cedar Fair Parks worldwide if a deal was agreed upon in the future.

What do you think of this incident at the California theme park? Let us know in the comments below!

Let the expert team at Academy Travel help you plan your next magical vacation to Disney World’s water parks, four theme parks — Magic Kingdom, EPCOT, Disney’s Animal Kingdom, and Disney’s Hollywood Studios — and the Disney Springs shopping and dining district! If you’re making a trip to a Disney Park, there is much to see and enjoy.