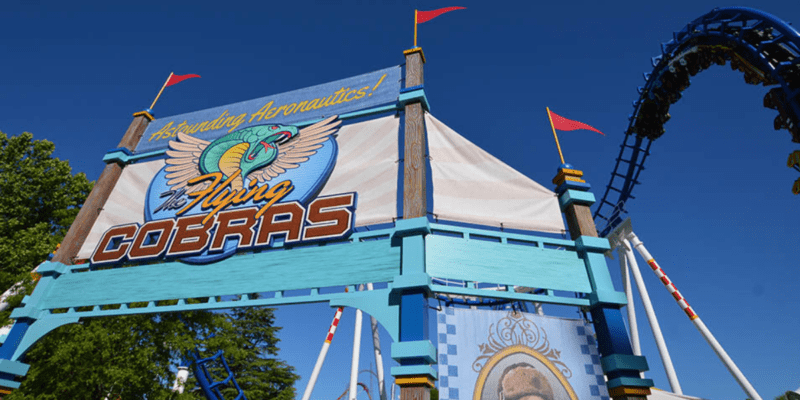 Experiencing a roller coaster for the first time is probably one of the most thrilling and exciting experiences a Guest could have, and while seeing themselves involved in an accident is the last thing going through their minds, there is always a possibility that something unexpected could happen, especially when riding a high-speed roller coaster.

Guests recently went through a terrifying experience at Carowinds in Charlotte, North Carolina, as one of their most thrilling attractions suffered from a malfunction. Park officials said the incident happened on “The Flying Cobras” last Friday.

“On Friday, April 29, Flying Cobras, located in County Fair at Carowinds, had an unexpected ride stoppage on the lift,” park officials said in a statement to FOX Television Stations. “The park’s maintenance team responded quickly, and at no time were guests in danger. All guests were returned safely to the station and unloaded within 30 minutes. The safety and security of our guests and associates is Carowinds’ top priority.”

“I personally watched my tears fall from the sky, it was terrifying,” Allen added. “We go to the very top where they’re backing you up, and he was doing a countdown,” he continued. “He goes, ‘we are very sorry, but we are having technical difficulties,’ and we thought he was joking because of the surprise element or something.”

Allen also said the minutes of being stuck felt like hours, mainly because he and the other Guests were facing the ground completely, and children were screaming while their parents tried to calm them. He adds that he would’ve panicked a lot more if not for the efforts of the maintenance and operations Team Members. “They did their best to keep everyone calm,” Allen said.

Last month, riders got stuck on Electro-Spin, also at Charlotte’s Carowinds, making Guests wonder if this will now be the status quo for the park. Brandon Allen commented, “It seems like this is happening so often now, a few weeks ago, it was another one.  It’s almost like it continues to happen– and that’s what is so scary about it.”

While Guests surely decided to visit the park that day looking for thrills, this is probably not what they had in mind. Each rider was given two Fast Lane vouchers after the incident.

As of the publication of this article, officials had not released a statement explaining the reason why the ride got stuck.

According to the park’s website, rides are inspected and licensed by the North Carolina or South Carolina Department of Labor before opening.

“At Carowinds, the safety of our associates and guests is our top priority,” the website added. “Ensuring that rides are properly maintained and cared for is just one way to show this commitment.”

The official Carowinds website describes The Flying Cobras as follows:

This coaster sends riders through a 360-degree loop as well as a cobra roll at speeds up to 50 mph. Just as these thrill seekers catch their breath, fly through the entire ride again, but this time backwards. Riders are turned upside down a total of six times on this 125-foot tall, high speed looping coaster. Guests in County Fair can look to the sky to witness these daring aviation maneuvers of the Flying Cobras.

Seven infamous pilots are responsible for the amazing aerial acrobatics of The Flying Cobras. Each car of the roller coaster train has a different design and stunt pilot. Climb aboard and see which one you will fly with – Chet, Sandy, Flip, Sam, Ace, Gale or Chuck. The Flying Cobras queue line is filled with old-fashioned props including propellers and bios of the two brothers that lead this gang of aerial daredevils.