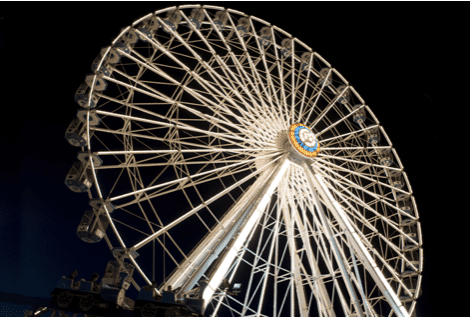 Tragedy struck an amusement park in New Jersey Monday morning when a man fell to his death while working on a Ferris wheel attraction.

Gillian’s Wonderland Pier, an iconic Ocean City amusement park, is known for its vast array of attractions all located on the Jersey Shore. According to reports from NJ.com, Ocean City Fire Department responded to Wonderland Pier at 10:32 a.m. Monday for a call regarding “a subcontractor who fell from a lift on the Ferris wheel.” The 144-foot Ferris wheel, known as the Giant Wheel, is among the largest on the East Coast.

Jay A. Gillian, President of Gillian’s Wonderland Pier, shared the following statement about the incident:

“We are saddened to report that an employee of a subcontractor working on a lift at Gillian’s Wonderland Pier suffered a fatal injury Monday morning. Our thoughts and prayers go out to his family. We are cooperating with all appropriate authorities to thoroughly investigate the cause of this tragic accident. As we get more information we will provide it.”

The man was identified as Robert W. Sanger, 62, of Pittsgrove. He was a welder employed by Cargo Tech International of Swedesboro.

This isn’t the first incident to unfold at an amusement park regarding workers. A worker is currently in the midst of a lawsuit at Carowinds in Charlotte, NC after having his hand severed while inspecting the attraction Windseeker in 2019.