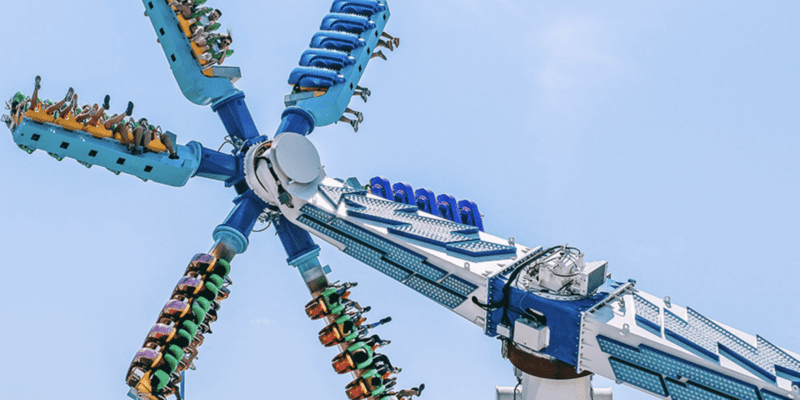 Theme parks serve as an opportunity to escape from many of life’s stresses and spend time with family and friends taking in unique attractions and experiences.

However, that doesn’t mean that every theme park experience goes exactly as planned.

According to a report from Queen City News (WJZY), many theme park goers found themselves in a bit of a frightening situation at Carowinds in Charlotte recently.

While riding the attraction the Electro-Spin, Guests were left stalled in midair. Many were hanging facing the ground with nothing but the ride restraint holding them in their seat.

Alexcia Powell and Brittany Gilliard, who shared the video on social media, said the sight was frightening, to say the least.

“People were terrified,” Powell told WJZY. “It was quite horrifying to watch because that could have been anyone on there. “It kind of deterred us from wanting to get on any other rides for that exact reason,” Powell said. “Like what if we get on and we get stuck upside down or midway through a loop? You never know.”

Both Powell and Gilliard said they would both revisit Carowinds in the future, but only to enjoy the water park.

The videos shared on social media have totaled thousands of views and many viewers expressed sentiments that they would never ride another amusement park ride.

Carowinds provided the following statement to WJZY on the incident:

“Safety and security of our guests and associates is our top priority. Unfortunately, while we work hard to provide the best experience possible, attractions may not always be operational.”

No injuries were reported from the incident and while it may have been a terrifying sight for some, Carowinds Team Members were trained to take care of Guests and ensure their safety throughout the incident. The ride features a shoulder harness and a seat belt that straps between the rider’s legs.

Electro-Spin is a shock of fun for families and thrill-seekers alike, definitely a County Fair favorite. When boarding this attraction, riders are seated on floorless gondolas as they prepare for a ride like no other. Electro-Spin sends its riders through a freely rotating orbit, as its arms flip them upside down and all around. This unique ride is sure to leave thrill seekers awed by its arsenal of tangled tricks.

Many theme park goers have been uneasy since the tragic death of 14-year-old Tyre Samson, who was released from his seat while experiencing the Orlando FreeFall at ICON Park. The attraction has since been closed indefinitely for investigation and SlingShot Group, which operates the attraction, also was demanded by ICON Park to stop its operation of the Orlando SlingShot. The family announced that it is planning to file a lawsuit.