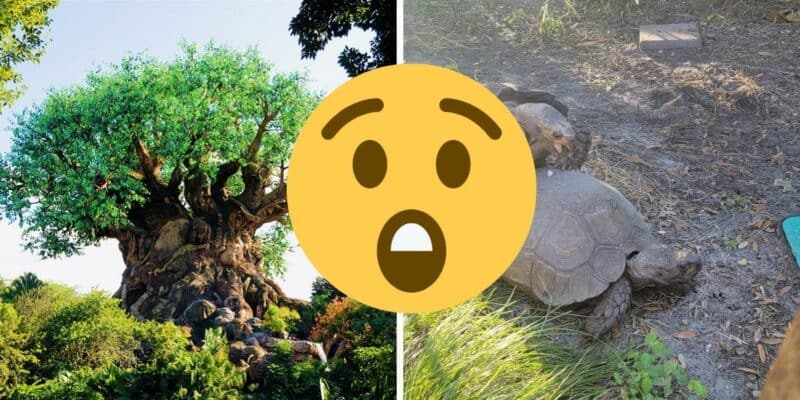 Disney’s Animal Kingdom is one of the four theme parks located at Walt Disney World. When visiting, Guests can see a wide variety of wildlife, including gorillas, lions, meerkats, okapis, rhinos, tigers, flamingos, otters, and more.

On a recent trip to Disney’s Animal Kingdom, Guests were in for a surprise when they visited the tortoises.

Related: Lions Become Intimate After Guest Sings “Can You Feel the Love Tonight?”

Disney World Guest, Deb K., was walking through the animal exhibits offered at the theme park when, suddenly, they were in for a bit of a surprise when they reached the tortoises. Of course, because the animals are living in their natural habitat, there is a chance that Guests will see this type of behavior from time to time.

Deb K. got a good laugh out of this as she snapped a photo, which you can see below.

You never know what you may see when visiting animals in their natural habitat at Disney’s Animal Kingdom.

This isn’t the first time something like this has happened at Disney’s Animal Kingdom. Back in February, we reported on two bongos having intercourse, which you can read more about here.

If you are visiting Disney World in the near future, be sure to hop over to Disney’s Animal Kingdom and check out the animal exhibits located throughout the Park. Guests can also ride Kilimanjaro Safaris where they can spot a wide variety of animals including gorillas, hippos, giraffes, bongos, and more.

When you are transported into the Africa portion, and come across the lion’s den, keep your eyes peeled because the male lion is actually the model Disney used for Simba in Favreau’s live-action The Lion King.

Have you ever seen anything like this while visiting Disney’s Animal Kingdom or when riding Kilimanjaro Safari’s? Let us know in the comments below.