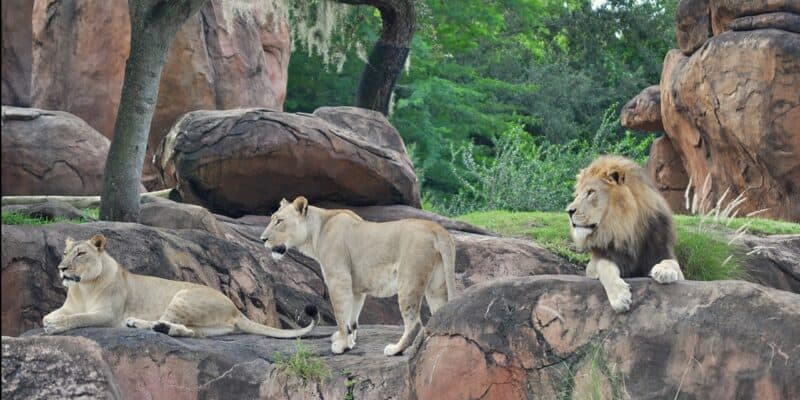 Disney’s animated movie, The Lion King (1994), became an instant classic and is one of the most watched Disney films ever. Simba and Nala became so popular within Disney loving families that in 2019, Disney released a “live-action” remake of The Lion King,which also took the world by storm as it quickly broke records, even becoming the highest-grossing animated movie.

To this day, Disney fans everywhere are still watching the Jon Favreau film on Disney+ as they can’t get enough of Billy Eichner as Timon and Seth Rogan as Pumbaa.

Songs from The Lion King, including “Hakuna Matata” and “I Just Can’t Wait to Be King” are fan-favorites and are sung by children and families everywhere. And it seems that the songs from the movie are even loved by real-life lions!

Sarah shared to Twitter that she recently visited a lion exhibit and began singing “Can You Feel the Love Tonight?” from Disney’s The Lion King. As she sang, two of the lions became intimate. She writes:

i s*** you not, i was just standing in front of a lion exhibit singing “can you feel the love tonight” and two of the lions starting have sex during the chorus

i shit you not, i was just standing in front of a lion exhibit singing “can you feel the love tonight” and two of the lions starting have sex during the chorus

It is unclear if this was at a Disney Park, or a different theme park, but regardless, it is hilarious to see The Lion King help the lion population.

If you are visiting Disney World in the near future, be sure to hop over to Disney’s Animal Kingdom and ride Kilimanjaro Safaris. When you are transported into the Africa portion, and come across the lion’s den, keep your eyes peeled because the male lion is actually the model Disney used for Simba in Favreau’s live-action The Lion King.

Do you love The Lion King? Let us know in the comments below.