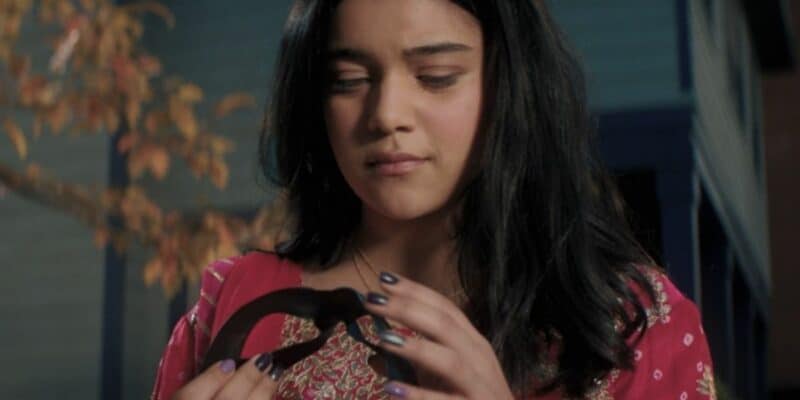 Marvel Studios’ next two series headed to Disney+ will feature female heroes and have been drowning in controversy. She-Hulk starring Tatiana Maslany (Orphan Black) as Jennifer Walters/She-Hulk has been criticized for poor CGI and her lack of muscles compared to her cousin Bruce Banner/Hulk (Mark Ruffalo). And fans of Kamala Khan/Ms. Marvel (Iman Vellani) have been vocal about disliking the power change.

Ever since the first leaks revealed that newcomer Iman Vellani’s Kamala Khan would not have the same powers as her Marvel Comics counterpart, fans began tweeting with the hashtag #FixMsMarvel. They started petitions begging Marvel Studios to keep Kamala Khan’s polymorphic or size-changing and stretching powers.

They did not care that the Marvel Cinematic Universe would not reference her Inhuman origin. It seemed like a farfetched that Kevin Feige would ever use the Inhumans again until that recent cameo of Anson Mount as Blackagar Boltagon/Black Bolt, the king of the Inhumans in Doctor Strange in the Multiverse of Madness (2022).

Ms. Marvel fans have speculated why the MCU made this massive change to her powers, Iman Vellani’s character will instead of Green Lantern-like energy constructs. Was it to distinguish her from Reed Richards/Mister Fantastic; or to tie her to Carol Danvers/Captain Marvel (Brie Larson); or even like She-Hulk just to make her more attractive/sparkly to Marvel movie fans?

Ms. Marvel will begin streaming on Disney+ on June 8, 2022, and it is too late for Marvel Studios to change the powers back so fans are having to accept that this is the version of Kamala Khan they will get. But star Iman Vellani has assured fans that if they just look past all of the backlash, they will see something that they will enjoy.

“It taps into the future of her story as it connects to her other friends that she will meet in the upcoming film The Marvels. She’s interested in knowing, ‘Great, does that mean I’m an Asgardian? Did I get hit with gamma rays?’ No, it’s seemingly none of those things. It goes to her own past and her heritage and lineage.”

“‘I’m very possessive [of Kamala],’ she says. ‘I think we stay true to what the comics brought. The themes have always been about identity and about marrying the 50 million things that make Kamala. For all I care, she could shoot sausages out of her fingers, as long as she still goes on that self-discovery journey.'”

Related: Not Everyone Is Happy About “Bittersweet” ‘Daredevil’ Reboot

One of the reasons fans are so opposed to the power change is that the powers were a metaphor for Kamala Khan’s story of self-discovery. Back in 2018, the creator of Kamala Khan/Ms. Marvel, G. Willow Wilson told Entertainment Weekly:

“We spent months going back and forth about what her powerset should be, how it should function, how it should look on the page. It was really tough. I knew from the beginning I didn’t want her to have sparkly, hand wave-y, floaty, pretty powers. There were plenty of those! I really wanted her to have something kinetic, a bit weirder-looking, something that was really fun to look at, something that communicated well on the page.”

“I also wanted something that would tie into being a teenager. Not all of us have superpowers but we all remember being 16 and feeling out of place in our bodies. Having different limbs growing at different rates, it’s a struggle we can all relate to, and having a powerset that spoke so clearly to that part of life, that part of growing up, was really appealing to me. It meant we could tell a story that worked on several different levels.”

Willow Wilson and co-creator Sana Amanat, who is a producer on the show have endorsed the power change.

Let us know in the comments if you plan to give Ms. Marvel a chance or boycott it over the controversy.