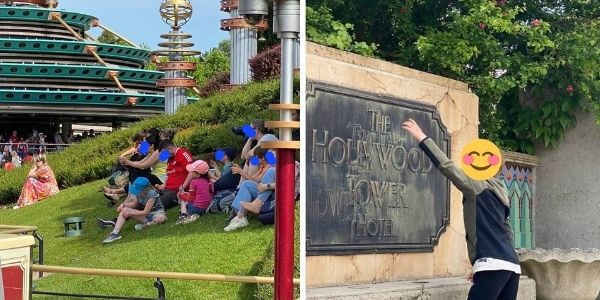 Some Guests recently explored Disney however they wanted to.

Part of what makes the experience so great is the insane attention to detail that Disney offers. All of the Disney Parks are famous for their intense theming and immersive details. You may notice this with the incredibly-detailed buildings, some of which you cannot even access. It’s a dream of every Disney Park fan to find their way into an off-limits area just to see what it actually looks like inside. But Disney has rules for a reason and Guests are expected to follow them and stay out of areas they are not supposed to be in.

Recently, it seems like Disneyland Paris has been having some issues keeping Guests corralled while in the Park.

DLP GUESTS SHOW (@dlp_guests_show) shared quite a few tweets showing Guests running wild and doing whatever they wanted while in the Park. Check the photos out below accompanied by some very sarcastic captions:

Maybe he wants to clean the fountain?…

The view is better from up there?

Small corner in the shade perfect for resting…

Of course, with the number of Guests that visit each of the Disney Parks and Resorts, it’s impossible to try and control every single one. But the fact that this is so common that an entire Twitter account was created to showcase Guests breaking the rules is quite unfortunate and disappointing.

Guests are always encouraged and instructed to remain in designated areas of the Park as this not only helps maintain the Park but keeps Guests safe as well. Failure to do so could have you removed from the Park.

Despite new shows like Disney D-light, the new drone pre-show to the Disney Illuminations fireworks and character cavalcade such as Dream… and Shine Brighter! in front of Sleeping Beauty Castle, perhaps the most enticing aspect of the three-decade celebration is the opening of Disney Parks’ second Avengers Campus.

For now, the only Avengers Campus at any Disney Park is the one found in Disney California Adventure at Disneyland Resort in Anaheim, Southern California. The arrival of the Marvel-themed area at the former Euro Disneyland Park is just one of the forthcoming enhancements coming to Disneyland Paris. Over the next two years, the Disney Park will welcome Avengers Campus, Arendelle: World of Frozen, and a rumored Star Wars Land akin to Star Wars: Galaxy’s Edge at the Walt Disney World and Disneyland Resorts