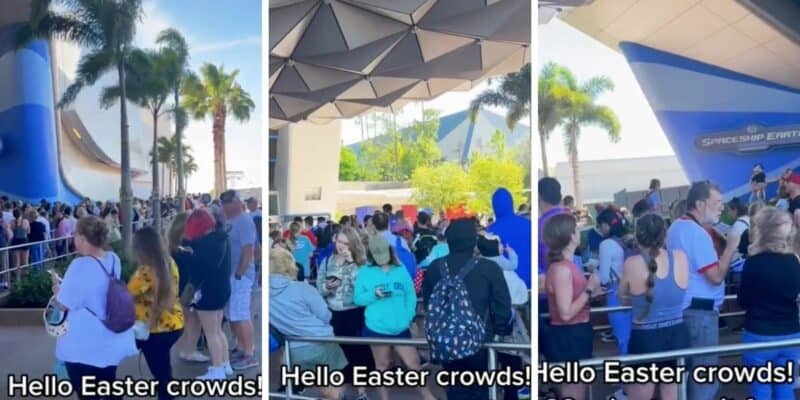 We have seen a massive increase in crowd levels at Walt Disney World’s theme parks — Magic Kingdom, EPCOT, Disney’s Hollywood Studios, and Disney’s Animal Kingdom — over these last few months due to spring break. Now, those crowds are continuing as this weekend is Easter weekend.

Related: Crowds Pack Into EPCOT Despite Disney Not Operating at Full Capacity

Many families visited EPCOT yesterday, Friday, April 16, resulting in long lines for rides and packed in crowds. For example, Spaceship Earth’s line wrapped outside of the designated queue area as the posted wait time was 60 minutes!

TikTok user rhihanna0327 shared a video to the social media platform showing the Spaceship Earth line extending outside of the designated queue, writing:

I miss the days where spaceship earth was only 10 mins

You can see the full video below.

Although the crowds look as though they are at pre-pandemic levels, we have recently confirmed Disney is still not operating at full capacity — and may never do so again.

Although McCarthy stated they do “not want to have the Parks bursting at the seams”, the amount of Guests attempting to leave EPCOT seems like the complete opposite.

If you are planning on visiting Walt Disney World, make sure you plan ahead and secure your Park Pass reservation.

Have you visited Walt Disney World recently or are you planning to? Let us know in the comments below.