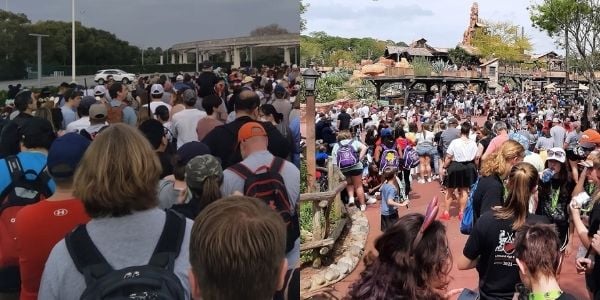 While anytime is a good time to visit the Disney Parks and Resorts, we can’t help but wonder if Spring Break may be too crowded for even the most hardened Disney Park fans.

Related: Disney Breaks Boundaries, Iconic Princess May No Longer Be Played By A White Performer

As we have previously covered, the last few weeks at the Walt Disney World Resort in Orland, Florida seems to be a hot spot for vacationers, with all fours Parks reaching capacity multiple times during President’s Day Weekend. Now, with Spring Break amongst us, the crowd situation continues to get worse, with the Parks absolutely slammed with Guests eager to spend a week at Disney and away from school.

Chris Yohn, a Disney Parks fan shared a photo with us of their morning in Fonrtierland at Magic Kingdom:

Another shared a photo of them at the Transportation and Ticket Center at the Magic Kingdom. See the insane photo below courtesy of Patrick Keefe:

As you can see, there is a massive sea of people all waiting to get into the Park. The Transportation and Ticket Center acts as a middle-ground for Guests wanting to visit EPCOT as well as Magic Kingdom. More on that below:

Soar high in the sky aboard our world-famous monorail—originally conceived as a public transport for the future!

Additionally, there are express round-trip services from the Transportation and Ticket Center to 2 theme parks: Epcot and Magic Kingdom park.

Will you be visiting Disney World for your Spring Break? Let us know in the comments below.