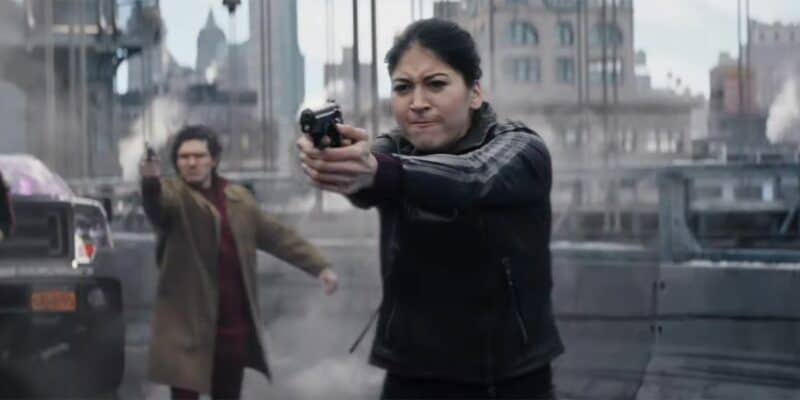 Last November, Kevin Feige’s Marvel Cinematic Universe brought back Jeremy Renner’s Hawkeye in his self-titled festive series. While Hawkeye left the door open for a second season, it seems that Marvel’s Echo is the place to find answers to the questions left after Hawkeye ended.

Star of Hawkeye, and soon-to-be headlining star of her own series, Alaqua Cox, has revealed that Echo has begun filming today, April 21, 2022.

Hawkeye became the fifth outing for the MCU’s television division. Joining the likes of WandaVision, The Falcon and the Winter Soldier, Loki, and What If…?, Hawkeye debuted at the end of November last year and quickly became a favorite among Marvel fans.

After all, the Avenger-led series did a lot for the onscreen Marvel Universe with its exploration of Ronin, the introduction of Hailee Steinfeld’s Kate Bishop, and the MCU debut of Vincent D’Onofrio’s Wilson Fisk AKA Kingpin — the villain from the hugely popular Daredevil series formerly on Netflix.

Not only did Jonathan Igla’s Hawkeye deliver on classic Marvel New York action, but it also continued to add weight to the seemingly imminent arrival of the Young Avengers with Florence Pugh’s Yelena Belova/Black Widow entering the mix. Belova was last seen in the post-credits scene of Scarlet Johansson’s (Natasha Romanoff) Black Widow (2021) being approached by Valentina Allegra de Fontaine (Julia Louis-Dreyfus) to hunt down Renner’s Clint Barton/Hawkeye.

Most importantly, Hawkeye brought Alaqua Cox’s Maya Lopez, AKA Echo, into the fold. The Native American Deaf actress debuted as Echo in Hawkeye as the leader of the Tracksuit Mafia. Hawkeye and her own “sequel” spinoff mark the actress’ first prominent television role.

Now, Cox has revealed via Instagram that Echo has entered filming.

Via ComicBook, Cox shared an image of a card and flowers from fellow actress Kawennáhere Devery Jacobs on her Instagram story. The message from Jacobs read:

Have a great first day of production! Break a leg, wound a knee, and take it all in! Ya’ll [sic] are making history. I wish I could be there to kick it off, but I know I’m there in spirit see you soon!

The adoptive daughter of Wilson Fisk, Maya Lopez, first appeared in “Daredevil #9” in 1999 and has long been associated with the Daredevil mythos in Marvel Comics history. Lopez’s superhero alter-ego, Echo, appears with a handprint stretched across her face and will seemingly be explored more in the MCU’s Echo series coming next year.

The series from writers and executive producers Etan Cohen and Emily Cohen will likely be included in Marvel Phase Four, joining the rest of the aired or airing — such as Oscar Isaac’s Moon Knight — television series and those set to release in the coming months. Ms. Marvel is scheduled for June 8, 2022, while She-Hulk and the second season of Marvel’s animated series, What If…?, are yet to get release dates.

For Hawkeye fans, the series has been confirmed to be a limited series after The Walt Disney Company and Marvel Studios’ opted to promote the series in this category for the 2022 Emmy Awards.

Are you looking forward to Echo? Let u know in the comments down below!