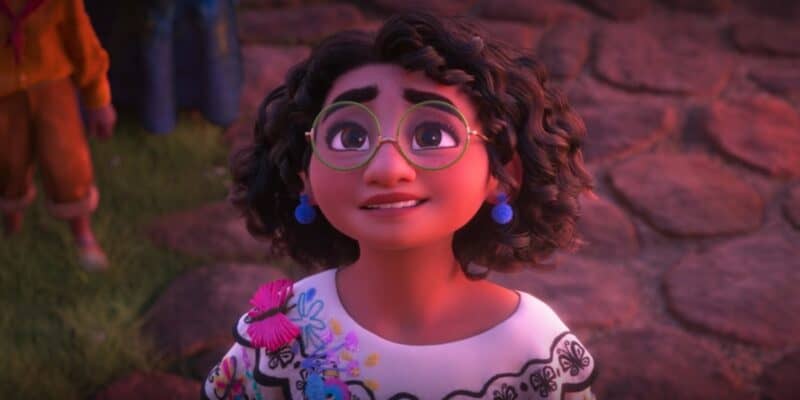 Disney’s 60th animated feature, Encanto (2021), has been captivating viewers for the last four months. Audiences have fallen in love with the family Madrigal, their magical powers, and overall message of love, acceptance, and self-worth in the new entry from Walt Disney Animation Studios.

Stephanie Beatriz originated the leading character of Mirabel Madrigal for the new movie, and after theories of Mirabel’s bisexuality hit the Internet, the actress has spoken out on her own thoughts of the character.

Encanto debuted exclusively in movie theaters in November 2021. Opening to a lukewarm reception at the global box-office, with a relatively small sum of just over $200 million, the film from directors Jared Bush, Byron Howard, co-director Charise Castro Smith, and producers Yvett Merino and Clark Spencer took on new life when it was released during the holidays on Disney+.

The streaming release of Encanto saw the movie skyrocket up charts all over the world. Disney CEO Bob Chapek confirmed that not only was Encanto an entire franchise but that the film was the fastest title to score 200 million hours watched on Disney+. That’s no small feat when Disney owns popular brands like the Marvel Cinematic Universe and Star Wars.

The extraordinary family and magical house became a viral sensation on social media, with the original songs and score to the Disney film coming from Lin-Manuel Miranda and Germaine Franco, and included hits like “The Family Madrigal”, “Surface Pressure”, and “We Don’t Talk About Bruno”. The latter jump up music charts including the US Billboard Hot 100, beating out all previously held Disney song charting records.

With such a large cultural footprint, viewers have been left analyzing the Madrigal family members, each with their own unique gift, with any fans have been left wondering just what Mirbel’s lack of magical powers means. Some theories suggest that Mirabel was destined to carry on her Abuela Alma’s legacy (who also does not have a gift) in leading the family unit and building their relationship with the vibrant town.

There are other ideas too and viewers have theorized that Mirabel is bisexual. With the theme of otherness being so prominent throughout the movie, as well as the color scheme of her clothing (the bisexual flag features purple, pink, and blue) which also includes a rainbow charm in the exact same color and color order of the flag.

Now, Stephanie Beatriz, the voice behind Encanto‘s new leading lady, has spoken out on the theories. Speaking to Vulture she said:

“For Mirabel’s journey, I was much more focused on how she felt like an outsider in her family […] But I think for Mirabel, the main thing happening is this feeling and desire to be accepted by her family and to be loved for who she is.”

Beatriz gained international recognition portraying Detective Rosa Diaz on Fox, and later NBC’s, Brooklyn Nine-Nine television sitcom where her fan-favorite character came out as bisexual in the series’ fifth season. The actress, who herself is bisexual, having publicly come out in 2016, ended by saying:

“That is the kind of feeling that can definitely be something that queer kids have, but for Mirabel it was for something different.”

What can be ascertained from Disney’s smash-hit is the remarkable way people of all different backgrounds and identities can see themselves in characters like Mirabel.

However, Disney has a track record of queer-coding characters but never fully revealing they identify as LGBTQ+. Many fans saw a queer love story in Disney Pixar’s Luca (2021) but that was never truly realized while Frozen (2013) and Frozen 2 (2019) fans have long been gunning for Elsa (Idina Menzel) to be identified as queer. Last year, the voice of Raya in Raya and the Last Dragon (2021), Kelly Marie Tran, stated her character was gay following the movie’s release.

Recently, following backlash over The Walt Disney Company’s financial backing of politicians supporting Florida’s “Don’t Say Gay” bill, a same-sex kiss has been reinstated into the upcoming Disney Pixar animation movie, Lightyear (2022) starring Chris Evans as Buzz Lightyear. But, there is seemingly a long way to go when it comes to clear and credible queer representation in Disney, and Disney-owned studios’, movies.

Do you think Mirabel is bisexual in Encanto? Let us know in the comments down below!