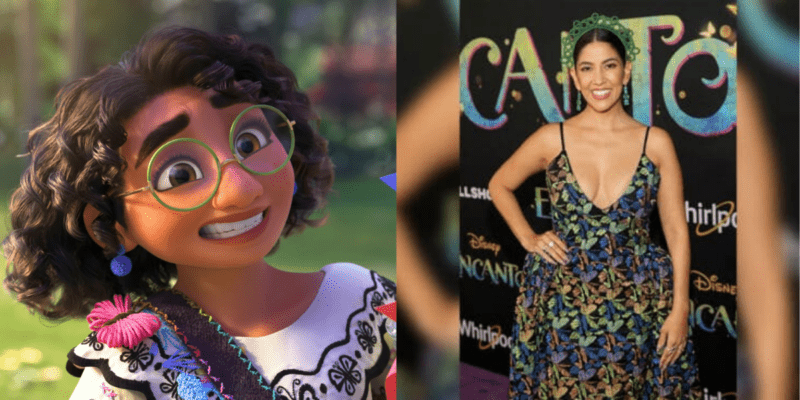 Encanto (2021) has become a worldwide phenomenon, with songs like “We Don’t Talk About Bruno” and “Surface Pressure” taking over top music charts even months after the original release. Other songs from the movie like “What Else Can I Do?”, “The Family Madrigal”, “Colombia, Mi Encanto”, and “Dos Oruguitas” also became widely popular both on music streaming platforms and social media.

The main character of the story, Mirabel, is played by Latinx actress Stephanie Beatriz, also known for her roles in the television series Brooklyn Nine-Nine (2013-2021) and the movie In The Heights (2021). In a recent interview for Variety Magazine, Beatriz shared her experience while recording for the role of Mirabel, and readers were left wondering if she took her part a little too far.

In the interview, Beatriz mentions how she was initially auditioning for a different role in the movie, but when directors Byron Howard and Jared Bush saw her energetic performance of “You’re Welcome” from Moana (2016), also directed by Bush and written by Encanto songsmith Lin-Manuel Miranda, they decided she was the “missing piece” they had been looking for. Over 15 recording sessions were required for the film’s dialogue alone, extending over years. The musical numbers, signature to most Disney movies, ended up adding to even more.

It was precisely during the recording session for the final rendition of “Waiting on a Miracle”, Beatriz’s solo song in the movie, that she found herself in a rather tricky situation, as she withheld an important detail from the recording team.

Stephanie Beatriz, pregnant at the time, performed the song while going into labor. She tells the story as follows:

I didn’t want to tell anybody at Disney because I didn’t want anyone to freak out, but I was already having some contractions when we were scheduled to record that day. I was like ‘Well, fingers crossed I finish the song before [the baby] comes!’

Her daughter, Rosaline, was born the very next day. When director Byron Howard was asked if he was aware of the situation, he laughed and said:

Songwriter Lin-Manuel Miranda added to this, jokingly saying Beatriz was singing “Waiting on a Miracle” while waiting for her own personal miracle.

The synopsis of Encanto reads:

The Madrigals are an extraordinary family who live hidden in the mountains of Colombia in a charmed place called the Encanto. The magic of the Encanto has blessed every child in the family with a unique gift — every child except Mirabel. However, she soon may be the Madrigals last hope when she discovers that the magic surrounding the Encanto is now in danger.

Such has been the impact that, thanks to massive Guest demand, you can now meet Mirabel at Disneyland Resort! Guests can find her near Rancho Del Zocalo Restaurante, located in Frontierland, in the same courtyard as Miguel from Coco (2017). Mirabel is the latest most popular meet and greet character at Disneyland, so be ready to line up early or wait for your chance to chat and take some pictures with her.

Initially, this face character meet-and-greet happened at Disney California Adventure Park as a part of 2021’s Festival Of The Holidays celebration events. The official Disney site described this opportunity as follows:

With her story set in Colombia, she brings a new cultural perspective to the immersive, Mexico and Brazil-inspired “Disney ¡Viva Navidad!” festivities at Disney Festival of Holidays, with live entertainment and interactive photo opportunities.

Meanwhile, at Walt Disney World in Orlando, Guest can enjoy Colombian cuisine as if they were in the movie on the new “Vibrante & Vívido: Encanto Cocina” booth, located at EPCOT as part of the International Festival of the Arts 2022 and the International Flower & Garden Festival 2022. While just one arepa might not heal you, as it happens when Julieta, Mirabel’s mother, is cooking, Guests are sure to enjoy the flavors of Colombia while the movie’s soundtrack plays in their heads.

Guest can also visit an Encanto-inspired garden at EPCOT as part of the International Flower & Garden Festival 2022. This beautiful garden showcases flower topiaries inspired by the film’s characters, such as Mirabel, Abuela Madrigal, Tía Pepa, Cousin Antonio, and of course, Señorita Perfecta Isabela.

Will you be visiting the Madrigal family soon? Let us know in the comments!