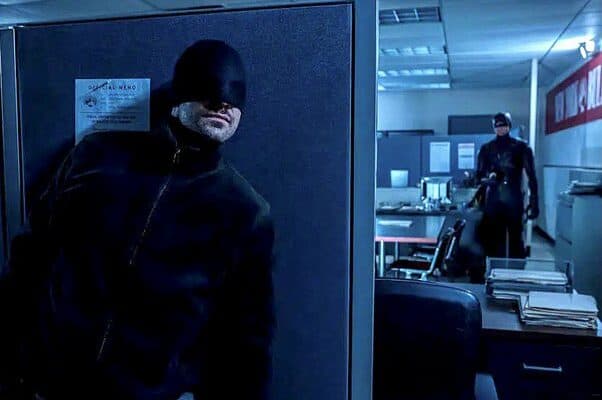 Spider-Man No Way Home (2021) surprised many fans with the small cameo of Cox’s Matt Murdock/Daredevil as the actor made his first appearance in the MCU. Cox has said this is the beginning of his time in the MCU and he hopes to do many crossovers with other characters such as Tom Holland’s Spider-Man.

Charlie Cox was asked in a recent interview if there were any characters he would like Daredevil to team up with. The actor responded that he loved the moments Daredevil shared with Black Widow and Spider-Man in the comics, but he would rather team up with a character from the Netflix show:

“I really like the Black Widow, the Daredevil/Black Widow stuff. That relationship is really funny to me, I don’t know why. I find it really funny and sexy at the same time,” Cox said. “Other than that, it’s difficult. The obvious one is Spider-Man, isn’t it? That is the one, I would have to get more time with Bullseye. We just touched on that story, and we were just gearing up for it before we weren’t allowed to continue. I really enjoyed working with Wilson Bethel on that character. There are so many, but I think the obvious one is, it would be really cool to get some Daredevil/Spider-Man stuff, more stuff.”

While Charlie Cox mentioned he would love to team up with Spider-Man again, it was interesting how he mentioned Wilson Bethel’s Bullseye. At the end of Season 3, Bullseye was in the middle of surgery to repair his spine after having it broken by Kingpin (Vincent D’Onofrio).

Season 4 of Daredevil was supposed to explore more of Bethel’s character as Daredevil and Bullseye are not exactly friends. To do a team-up would require something to change between the two characters as they don’t have any reason to trust each other. It wouldn’t be surprising if the two have another fight before resolving their conflicts.

All of the Bullseye vs Daredevil fight scenes were incredible to watch. Bullseye was great at throwing random things at Daredevil and it was his deadly precision that made him a threat to fight. With a gun, Bullseye could easily ricochet bullets to kill a person or to injure you.

During one of their first fights, Bullseye threw office supplies at Daredevil and left the Devil of Hell’s Kitchen with several cuts after their fight. Beforehand, nobody would have thought an office had any weapons, but Bullseye made it clear that anything can be a weapon as he used scissors, staplers, and pencils.

For these two to end up as friends would be odd, but MCU fans should expect to see more of Daredevil with Spider-Man as the duo are bound to team up soon. With Kingpin in the Marvel Cinematic Universe, it’s a matter of time before Spider-Man needs help and asks Daredevil to join him. It would also be interesting if Kingpin tries to kill Bullseye as Wilson Fisk isn’t very happy with Bullseye after the events of Season 3.

If you haven’t watched any of Daredevil you definitely should when the show releases on Disney+ on March 16. Here is a quick summary of Netflix’s Daredevil show:

Do you want Bullseye to enter the MCU? Let us know what you think in the comments section below!