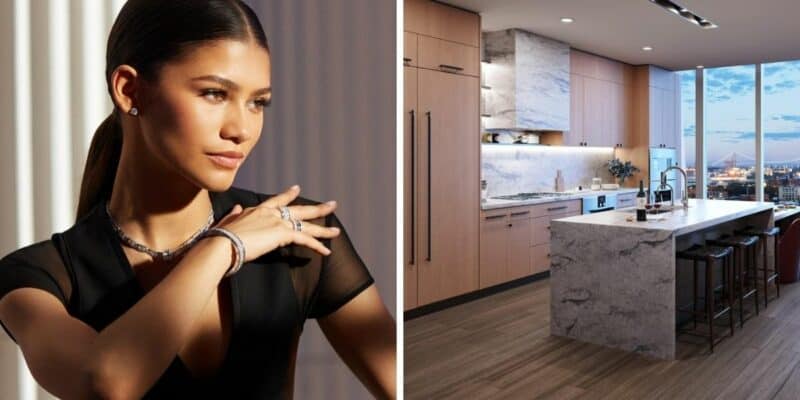 Zendaya has planted new roots in the Big Apple!

The actress, model, and singer has already become a Hollywood icon — and she’s only 25 years young. Before co-starring alongside Tom Holland in the new Marvel Spider-Man franchise, Zendaya rose to fame in Disney Channels’ Shake It Up, where she took on the role of Rocky Blue alongside with Bella Thorne.

She is also the youngest actress to ever win an Emmy for outstanding lead in a drama series for Euphoria! Now, the actress is making a new home for herself — in a stunning $6.76 million waterfront condo in Brooklyn, New York.

The Spider-Man and The Greatest Showman actress planted new roots in the Big Apple last summer as she purchased a beautiful waterfront condo in Brooklyn — and we have an inside look!

According to Variety, Zendaya’s new three-bedroom and two-and-a-half bathroom condo is the first home the Spider-Man: Homecoming actress has bought in New York, making this a milestone for the 25-year-old icon.

According to Vogue, the condo is jointly designed by two architecture firms — ODA, based in New York City, and Marmol Radziner, based in Los Angeles.

The tower features a “stunning array of state-of-the-art facilities, its residents given access to a pet wash, a fitness centre, a music room, and a 4,000-square-foot terrace on its rooftop, boasting panoramic views of the Manhattan skyline and New York Harbour.”

The kitchen, as you can see in the images above, is extremely spacious and an iconic part of this condo. Featuring a marble back-splash and countertop and a beautiful stone island, the kitchen is certainly a highlight.

Zendaya most recently starred in Spider-Man: No Way Home (2021), which joins Spider-Man: Homecoming (2017) and Spider-Man: Far From Home (2019). The film had a record-breaking opening weekend at the U.S. box office, bringing in $260 million, and continues to remain one of the most watched films across the country.

Do you wish you could live in Zendaya’s new waterfront Brooklyn home? Let us know in the comments below.