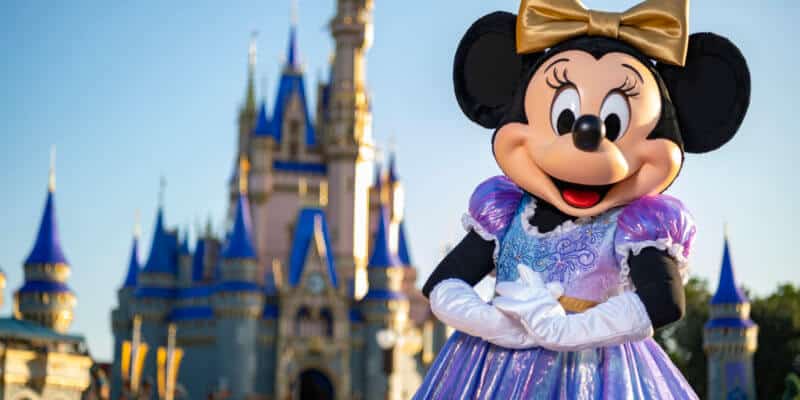 While magic is in the air at the Walt Disney World Resort, one sculptor is up in arms over the Mouse House seemingly stealing their design and selling it as part of their 50th anniversary celebration merchandise collection without credit or compensation.

Walt Disney World began The World’s Most Magical Celebration last October. Marking 50 years of the Central Florida destination, Disney pulled out all the stops for its half-centennial. From all-new fireworks over Cinderella Castle in Magic Kingdom Park and EPCOT’s World Showcase to daytime experiences like Disney KiteTails at Disney’s Animal Kingdom, and new EARidescent costumes for many Disney characters, the Disney Park’s celebration is remaining a memorable affair.

One contentious part of the major Orlando Resort’s event (no, not Disney Genie or Lightning Lane) was the limited 50th merchandise that was available for Guest purchase from October 1. Guests lined Main Street, U.S.A., to snag the prolific Starbucks tumbler, for example, — which also caused chaos at the Emporium and later at World of Disney at Disney Springs — and then earlier this year Disney released the Figment Popcorn Bucket which saw six-hour plus waits before selling out. It’s safe to say that Disney Resort merchandise is more popular than ever.

Nestled within the Parks, one Guest found something startlingly similar to their friend’s own creation recently, with the creator themselves claiming Disney — or a freelancer commissioned by Disney — has stolen their work without compensation or credit.

Taking to TikTok, Andrew Martin (@monstercaesarstudios), shared his own design and the one found in Walt Disney World.

Disney Stole and is selling my work

In the video, Martin states:

“In 2018, I made this fan art sculpture of one of the tiki drummers from Disney’s Enchanted Tiki Room.”

Wanting to recreate a sculpture based on one of his favorite childhood attractions from Adventureland, Martin goes on to explain that when he posted his final design on social media, he received “hundreds” of messages from people wanting to buy the small sculpture. Martin then released the 3-D model on Thingiverse under a Creative Commons License “so people could just make one for themselves”, but for non-commercial use.

The creator then goes on to state what happened with his design and Disney merchandise:

“Then, last week a friend of mine sends me this photo of the official Disney World 50th Anniversary commemorative music box featuring the Tiki drummer.”

After Martin’s friend thought he saw the significant resemblance between Disney’s creation and his own, Martin was “surprised” at just how similar the two designs looked, claiming “it is mine.”

The viral video — which has now racked up over 700,000 views — then goes into detail at just how the Disney sculpture is the exact same design as his own. Martin notes that this character is not his own original idea, making his point that the sculpture, down to a two conjoined circle mistake, is the exact same, and not just an interpretation.

Martin finishes by saying that:

“Disney is taking credit for my work and selling it in their parks without my permission, consent, or even giving an artist credit.”

He goes on to give “Disney the benefit of the doubt”, saying:

Comments on the video shows many fans lashing out at Disney for allowing this to happen. One comment said, “sounds like a lawsuit”, while another could not believe that the Walt Disney Company had let it occur. However, on the other hand, many comments are questioning why the creator is mad when he took Disney’s character and made his own model of it in the first instance. As always, there are two sides to every story.

Disney World has a host of collective figurines on sale to celebrate the 50th anniversary of the Resort with this Enchanted Tiki Room music box just one of many. It begs the question of whether any other of the commemorative merchandise has been replicated from other artists’ work.

Disney merchandise has come under fire in recent months after seemingly reducing quality on some of its lines leaving Guests wondering if profit means more than experience. The 50th anniversary Spirit Jersey was delivered to certain Guests in a rather shocking manner while over at Disney’s Hollywood Studios’ Star Wars: Galaxy’s Edge location, Savi’s Workshop, Guests were having to carry home their $200+ handbuilt lightsabers in plastic bags.

Martin seems to echo many Guest merchandise concerns when he says “do better, Disney”, at the end of his viral video.

Have you seen this Tiki Room figurine in the Parks? Let us know in the comments down below!