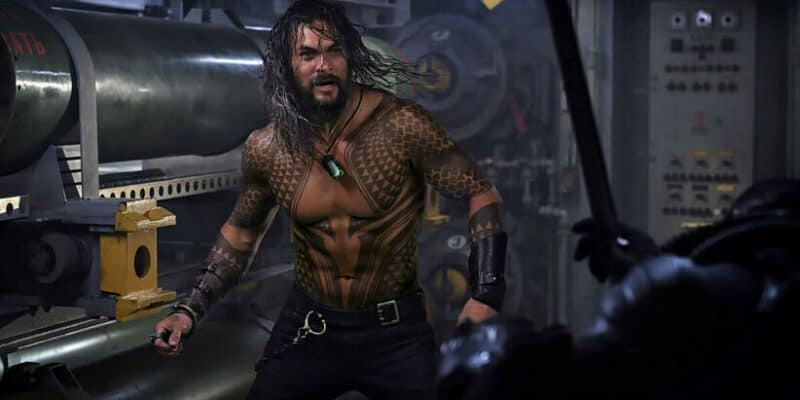 Aquaman leading man Jason Momoa is known for his heartthrob good looks, which are topped off (literally) by his iconic long hairstyle.

Now, however, it seems that Momoa’s locks have changed for his role in Aquaman 2, which is officially titled Aquaman and the Lost Kingdom. In a new poster [below] for the upcoming film, a sketch of Momoa has distinctly blonde hair, which is a noticeable departure from his usual darker ‘do.

Previously, a DC teaser image [below] for the Aquaman sequel featured this change, as well. It is worth noting that, although the lighter hair is certainly a departure for Momoa’s appearance, it is in keeping with how Aquaman appears in DC Comics.

…[although this hairstyle and beard haven’t] been seen in Momoa’s three DC Extended Universe appearances and his screen time in Zack Snyder’s Justice League, it’s nothing new for DC’s resident underwater hero.

In both DC Comics and past animated shows featuring Aquaman, the half-Atlantean usually sports golden locks and a matching beard…

Fans have not yet seen the first trailer for Aquaman and the Lost Kingdom, but the film is due to hit theaters on December 16, 2022.

Recently, Momoa and his wife, Lisa Bonet, confirmed that they are divorcing.

The pair — who were together for 12 years prior to their 2017 marriage — share two children, son Nakoa-Wolf Manakauapo Namakaeha Momoa and daughter Lola Iolani Momoa, who will undoubtedly be their focus during this difficult time as the family transitions.

In recent months, rumors have abounded that there was trouble in paradise. Speculation that the Sweet Girl actor and Bonet were on the rocks was fueled when the star was spotted exiting a Los Angeles bar without his other half in November 2021 — but did have a mystery woman in tow.

Some fans have blamed Momoa’s Aquaman costar, Amber Heard (Mera) — who is embroiled in her own bitter legal battle with ex-husband Johnny Depp (Pirates of the Caribbean, Fantastic Beasts) — for the former couple’s split, but there has, of course, been no confirmation that these reports hold water.

Momoa has been living in a $750,000 van on his friend’s California property near his family home since news of his divorce broke.

What are your thoughts on Jason Momoa’s dye job?