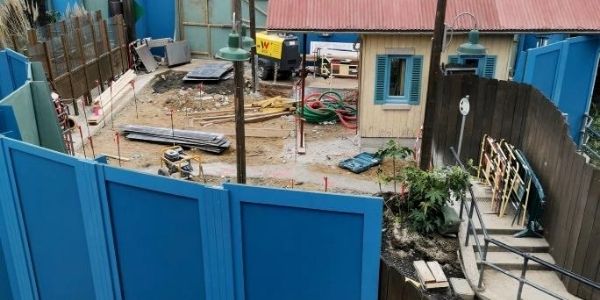 If one thing is for certain when visiting any of the Disney Parks and Resorts, it’s that things are always changing.

From new attractions like the Guardians of the Galaxy roller coaster in EPCOT or the upcoming TRON attraction in the Magic Kingdom, there’s usually something new to look forward to when visiting the Disney Parks. Disneyland Paris has a lot going on right now in order to prepare for its 30th Anniverdary celebrations which begin in March.

One Disney ride has been undergoing an extended refurbishment in order to freshen up the exterior of the rude, but the refurbishment seems to be taking a little longer than expected. Crush’s Caster is an exciting ride themed around the character Chrush from the Pixar film Finding Nemo (2003). Recently, we got some behind-the-scenes photos of what’s happening with the ride. See the full tweet below from DLP Report (@DLPReport) on Twitter:

At Cush’s Coaster, the queue remodeling project is not nearly done  (the attraction is open, however):

🔧 At Cush’s Coaster, the queue remodeling project is not nearly done 😅 (the attraction is open, however): pic.twitter.com/yR5SdlKHMK

The attraction closed earlier this January for some refurbishment and remodeling work. The ride is operational but the queue is still being worked on.

Join Crush and friends in Toon Studio®, where you’ll find the beached soundstage and set of the Disney•Pixar film,Finding Nemo. Then, aftertaking in the Sydney Harbour scenery, board a turtle shell and prepare for a ride through memorable moments from the movie.
Sit tight, as your shell dives into the ocean and begins its incredible journey. At first Nemo, Squirt and other familiar faces greet you in the Great Barrier Reef. But the serenity doesn’t last for long, as you’re sent plunging to the deepest darkest depths, where a sunken submarine sits surrounded by voracious glowfish, jellyfish and sharks. At Crush’s Coaster danger lurks. However, just in the nick of time, the strong East Australian Current churns you up and sends you spiralling back to Sydney Harbour to a rousing reception.

Another new exciting addition coming to Disneyland Paris is its version of Avengers Campus. The first version of this Marvel-centric land opened in Disneyland’s California Adventure last year and features a whole host of Marvel-themed attractions and entertainment.

Have you visited Disneyland Paris recently? Let us know in the comment below if you have!

Comments Off on Disney Remodeling Project “Not Nearly Done”, Still Being Worked On