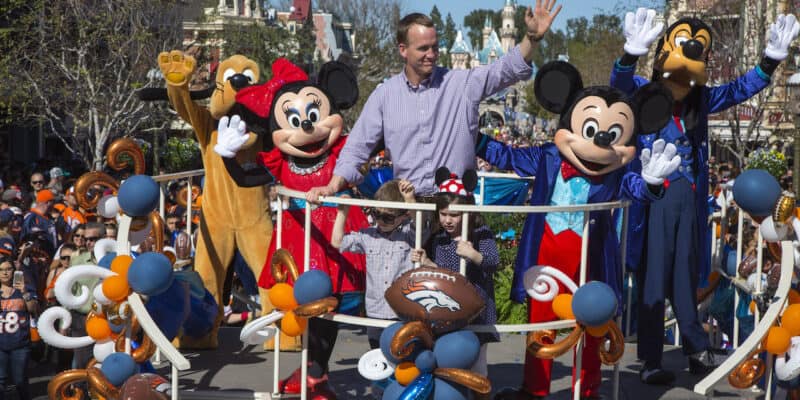 “I’m going to Disney World!” — the five sweet words that the Super Bowl MVP gets to yell after winning the biggest game in football, the Super Bowl. And it’s almost that time of year once again as the NFL is currently hosting its playoff season with Super Bowl LVI scheduled to air on Sunday, February 13.

As we quickly approach Super Bowl LVI, the Disney Parks are getting sports fans excited as Disneyland just announced a variety of events happening leading up to the big game — including Hall of Famers and past Super Bowl champions visiting the theme park!

Beginning on Wednesday, February 9 and running through Super Bowl LVI on February 13, Disneyland Resort will be hosting multiple experiences, perfect for sports fans.

Football fans, gear up for a week of magic as ESPN touches down at Disneyland Resort for Super Bowl LVI, with productions originating from Disney California Adventure park beginning Wednesday, Feb. 9, through Super Bowl Sunday on Feb. 13. Downtown Disney District will offer a fan experience Thursday, Feb. 10 through Sunday, Feb. 13.

With “Postseason NFL Countdown,” “NFL Live,” and “SportsCenter” segments, “NFL Matchup,” an “ESPN Deportes” presence, and more, fans at home will receive all the news, analysis, and commentary around the crescendo of the 2021-22 NFL season, while Disney California Adventure park guests can enjoy a fan experience, view the productions and may even spot some of their favorite personalities in person.

If you are visiting Downtown Disney, be sure to check out the outdoor fan experience, which will be located between Tortilla Jo’s and Splitsville Luxury Lanes from February 10 through February 13 from 1 p.m. through 7 p.m. PST daily. There will be games, giveaways, and more!

But that’s not all because Guests with applicable theme park reservations and tickets may also have the chance to catch some of their favorite ESPN shows and personalities at the Paradise Bay viewing area at Disney California Adventure. Disney Parks Blog shared who some of the sports Hall of Famers and past Super Bowl champions would be:

Will you be visiting Disneyland Resort for these exciting Super Bowl experiences? Let us know in the comments below.

If you want to visit Disneyland on your next vacation, let the expert team at Academy Travel help you plan your next magical vacation. You won’t want to miss everything the Disneyland Parks — Disneyland and Disney California Adventure — has to offer!