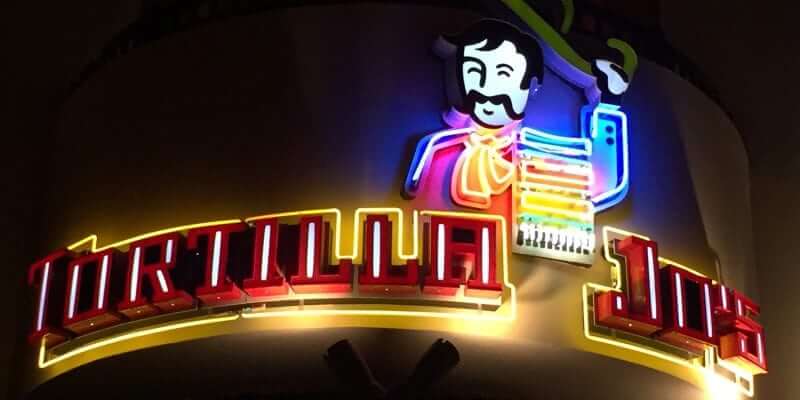 The Mexican holiday of Dia de los Muertos (Day of the Dead) is a hot topic in the Disney fan community these days, with Disney-Pixar’s latest feature “Coco” hitting theaters in November and Disney California Adventure’s Plaza de la Familia in full swing at the park’s Paradise Gardens area. But Disneyland Resort‘s Downtown Disney District has its own delectable Dia de los Muertos offering as well.

Tortilla Jo’s Mexican restaurant in Downtown Disney has been celebrating the culinary heritage of Mexico for some time now, but never has there been a more perfect time to visit, as the eatery observes Day of the Dead with its Dias De Los Muertos menu. I was invited to the location this past weekend and had the fortunate chance to experience much of what Tortilla Jo’s has to offer during this limited-time event. Upon arrival at the restaurant, the first thing I noticed is how attractive and welcoming the decor is, both in the lower level and on the upper balcony where my party was seated. The all-female mariachi band Mariachis Divas entertained diners during their meals, and roamed from the stairwell to the outside area performing their lively traditional Mexican music. After being seated, we were given Tortilla Jo’s standard menu in addition to the special Dias De Los Muertos three-course selections to peruse. Naturally– being there to experience the seasonal event– I wanted to try as much as possible from the latter, but my party explored a variety of options from both. As appetizers we received the usual (and very tasty) tortilla chips and salsa, plus we ordered the Beets and Roasted Calabaza Salad. The salad was very interesting, especially considering it wasn’t something I would ordinarily go for. It contains beets, squash, and goat cheese served in orange vinaigrette, and it was a tangy delight when we tried it. We also enjoyed the Posado Punch, which features tequila mixed with cranberry, lime, and pineapple juices. For my main entree I ordered the Tamales de Mole Negro off the Dias De Los Muertos Menu, which is available with either chicken or beef. The tamales delivered a very different type of flavor than I am used to when it comes to Mexican food, but one that I very much enjoyed. We also received the casa quesadilla (as recommended by our host) and that was quite a treat: crispy and fresh, served with smoky salsa. For dessert, we tried the heavenly Flan De Calabaza, complete with a stuffed churro on top! I can’t think of a more appropriate confection for a Mexican-themed trip to Disneyland. While we didn’t get to eat quite everything off the Dias de los Muertos menu, the remaining items look incredibly appetizing as well. For example, I’ll be sure to try the Grilled Pork Chops with black beans and the Day of the Dead Cocktail next year.

Overall this was a wonderful evening spent in a terrific restaurant that I hadn’t explored before. The wait staff was incredibly kind and made us feel right at home, and the atmosphere was the ideal mix of that classic Mexican feel with a touch of Disney magic in the air. After all, Tortilla Jo’s is located right around the corner from the Happiest Place on Earth.