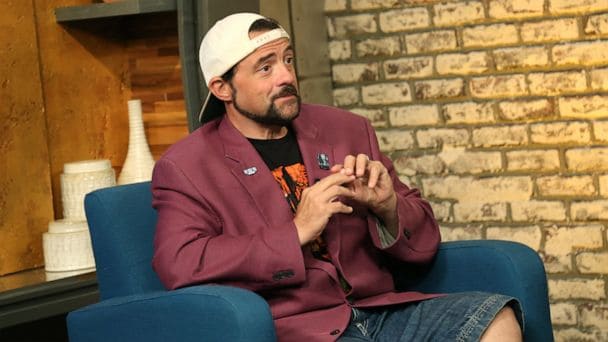 Clerks creator (and professional nerd) Kevin Smith is known for expressing his opinions about all things fandom on his Fatman Beyond podcast.

On a recent episode of the popular show, Smith shared his thoughts about the fact that Marvel Comics recently changed its controversial Punisher logo. The change comes after the logo was used for a number of political situations, including the Black Lives Matter movement and the January 2021 U.S. Capitol riots.

In its next “Punisher” series, Marvel has officially altered Frank Castle’s skull logo [above] to look different than the original logo [below], with two stylized horns and a different jawline. As one recent article explained:

Set to launch in March, the series will feature 13 oversized issues that run monthly, placing the finale out in April 2023. Saiz is set to draw the present-day journey of the character while Azaceta’s line art will be focused in the flashbacks. The series is also changing Castle’s iconic brand after its involvement in real-world controversies over the past few years.

Smith, however, does not seem to believe the logo shift is permanent, sharing the following thoughts with his podcast listeners:

Smith went on to share that he views the alteration as something of a ploy for Marvel to be able to “sell a bajillion copies” of whichever comic issue sees the original logo return — which, as we previously established, is something he feels in an inevitably:

“It’s a character that sometimes, based on the culture, has butted up against the culture. So, Marvel has tried to find ways to still keep a beloved character viable while not being associated with whatever they don’t want to be associated with. This is yet another example of that. So, if you’re like ‘Oh, I can’t stand what they’re doing!’ Take it from an old comic book fan, just wait 10 minutes, nothing is forever kids. You think that skull is gone from The Punisher’s chest forever? No. And when they put it back on his chest, they will sell a bajillion copies.”

It is, however, worth noting that Smith’s opinions don’t always pan out. He was forced to retcon his own WandaVision theory last year after his thoughts about the alleged “Skywalker-level” — a reference to Jedi Knight Luke Skywalker’s (CGI Mark Hamill) return in The Mandalorian Season 2 finale episode — did not play out as anticipated.

You can listen to Smith’s entire Punisher podcast episode, which also includes his thoughts about Star Wars’ latest series, The Book of Boba Fett, below:

Do you think Marvel will eventually return to its original Punisher/Frank Castle logo?