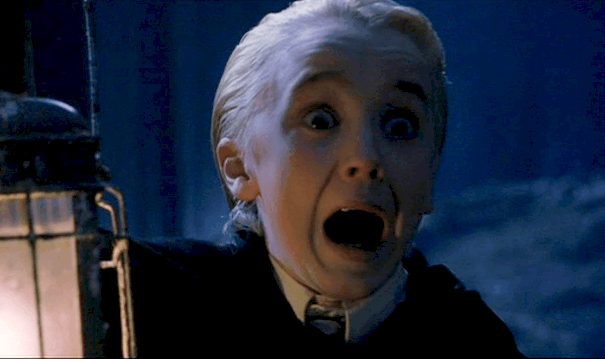 The Harry Potter 20th Anniversary: Return to Hogwarts reunion special, which celebrates 20 years since the release of Harry Potter and the Sorcerer’s Stone (2001), is now airing on HBO Max and it’s giving Harry Potter fans a glimpse behind the scenes of their beloved franchise.

In addition to watching their favorite Harry Potter cast members reunite for the first time since Harry Potter and The Deathly Hallows – Part 2 (2011), fans are discovering a number of new stories about actors’ time on set.

“The first scene that I shot was actually cut, it’s on the deleted scenes,” Isaacs said. “Draco touched something, and I used this cane and went, ‘Don’t touch anything, Draco.’ But I didn’t know how sharp the teeth were, they went right into little Tom’s hands. And he looked up at me, and his eyes welled with tears, and I went, ‘Tom, I’m so sorry, I didn’t realize how sharp they were and how heavy it was,’ and he went ‘It’s all right, it’s good for the scene.'”

Felton added, “He’d be this evil father, and when we’d say cut, he’d come and give you a cuddle and say, ‘Oh did I hit you too hard?’ Real Jekyll and Hyde, that one.”

You can watch the full scene, which also features Daniel Radcliffe, below:

What’s next for Harry Potter?

Mads Mikkelsen (Rogue One: A Star Wars Story) will replace the actor, though he has spoken out about being unsure if Depp’s firing was “fair”.

One brief description of the upcoming Fantastic Beasts: The Secrets of Dumbledore (2022) reads:

The third installment of the ‘Fantastic Beasts and Where to Find Them’ series which follows the adventures of Newt Scamander.

Have you watched Return to Hogwarts yet?