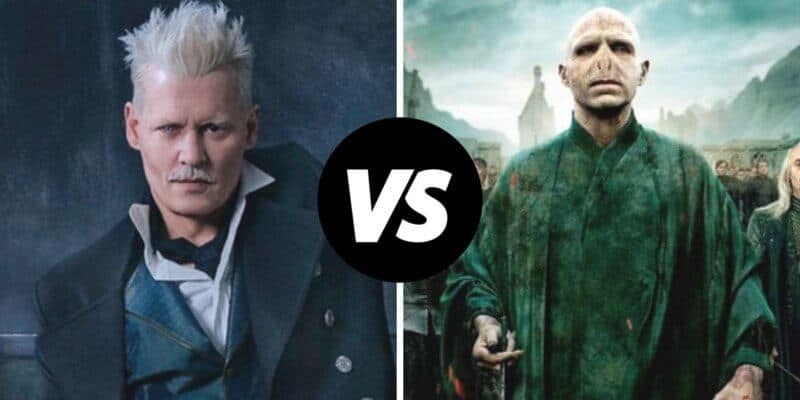 Any Harry Potter fan is familiar with the dark wizard who terrorized the British magical world in the Harry Potter franchise —  Tom Marvolo Riddle or, as he came to be known, Lord Voldemort (Ralph Fiennes).

Since the end of the Harry Potter films, with Voldemort’s defeat in Harry Potter and the Deathly Hallows II, fans of the Wizarding World universe have been introduced to another dark wizard — the wizard who terrorized the world before you-know-who.

The new Fantastic Beasts franchise has introduced Gellert Grindelwald (previously Johnny Depp, currently Mads Mikkelsen). The first movie of the new franchise, Fantastic Beasts and Where to Find Them, didn’t do much to detail the new villain’s history or powers.

Yet, the second movie was designed to do just that. Fantastic Beasts the Crimes of Grindelwald exposed to the world Grindelwald’s intensions, history, and a little bit of his intense powers.

Now that the Wizarding World has introduced its fans to two of the most terrifying and powerful dark wizards in magical history, there are two big questions that need to be answered. Who was more powerful and who was more dangerous?

In order to answer those questions, it is important to look at what the two dark wizards believed in. Throughout the Harry Potter movies, it is clear that what Lord Voldemort wanted the most was power — and his biggest fear was death. Much like his ancestor, Salazar Slytherin, the so called “Dark Lord”, Voldemort believed in the purity of the magical bloodline and that wizards and witches were superior to humans.

Voldemort’s obsession with magical blood purity was proven by his goals, which was to rid the Wizarding World of Muggle heritage — meaning, get rid of half-bloods by any means necessary.

Compared to Voldemort, fans don’t have as much information about Gellert Grindelwald, but it is clear what he aimed to achieve from something he Grindelwald said in Fantastic Beasts and Where to Find Them:

“A law [The International Statute of Secrecy] that has us scuttling like rats in the gutter! A law that demands that we conceal our true nature! A law that directs those under its dominion to cower in fear lest we risk discovery! I ask you, Madam President— I ask all of you—who does this law protect? Us? Or Them? I refuse to bow down any longer.”

Grindelwald wanted to end The International Statute of Secrecy, the law that hid the existence of magic and the Wizarding World from Muggles. Much like Voldemort, he believed that witches and wizards were superior to humans, but he did not aim to destroy the Muggle world, but rather to dominate Muggles for “the greater good”.

In terms of power, anyone who has read the Harry Potter books or seen the movies knows that Voldemort was a powerful wizard who had complete dominance of the dark arts, especially the killing curse Avada Kedavra. He was also an expert in legilimency — the act of navigating through multiple layers of a person’s mind — and had a strong allegiance of followers.

His lack of compassion and general pettiness, combined with his strong dominance of the dark arts, allowed him to create seven Horcruxes — a deed that had never been done before by any wizard in history.

The Life and Lies of Albus Dumbledore explained:

“In a list of Most Dangerous Dark Wizards of All Time, he would miss out on the top spot only because You-Know-Who arrived, a generation later, to steal his crown.”

In comparison, like previously stated, there is still much that we, fans, need to learn about Grindelwald as the upcoming Fantastic Beasts films are released but, based on what the new franchise has shown so far, Gellert Grindelwald was also extremely skilled in the dark arts.

The young Grindelwald was expelled from the wizard school, Durmstrang Institute, for performing experiments with dark magic in other students. This is an important detail about Grindelwald’s character and power because Durmstrang is a wizarding school known to accept only pure blood students — the school taught “Dark Arts” instead of only “Defense Against the Dark Arts”.

To be expelled from a school that was tolerant of dark arts for using dark magic, one can only imagine the terrible things he did.

In the second Fantastic Beasts movie, we finally saw a demonstration of Grindelwald’s abilities. During the scene in the Lestrange mausoleum, Grindelwald cast a Protego Diabolica, which is a spell that casts a protection ring of fire killing the caster’s enemies.

Grindelwald was not only able to cast the non-verbal spell, but was able to control it via some tentacles to kill most of the aurors present in the mausoleum. If that wasn’t enough, after Grindelwald apparated from the mausoleum, the Protego Diabolica turned into a fire daemon with the power to destroy Paris.

Yet, it is fair to point out that in Fantastic Beasts, Grindelwald was using the Elder Wand, so it is unclear if he was so powerful he was able to cast a Protego Diabolica big enough to destroy the city of Paris — or if he was only able to do that because he was wielding the Elder Wand.

As previously said, we know still very little about Grindelwald’s powers. Therefore, it is safe to assume that Lord Voldemort takes the place of most powerful wizard in magical history.

“Harry Potter: Did you know, sir? Then?
Albus Dumbledore: Did I know that I just met the most dangerous dark wizard of all time [Voldemort]? No.” –

In terms of magical powers, and the fear he instated in the magical community, it is safe to say that Voldemort had the most power in his hand, yet being the most powerful doesn’t necessarily means the most dangerous.

Comparing the two villains, Gellert Grindelwald posed a more infamous danger to the Wizarding community than Voldemort. Voldemort was powerful, yes, but he was also extremely greedy. His endless pursuit of power — and belief that he could be truly immortal — made him blind to several mistakes he made that lead him to his downfall.

For example, while he was in pursue of the Elder Wand, he did not notice that his Horcruxes were being hunted down and destroyed by the Golden Trio.

And, even after Voldemort had the Elder Wand in his possession, he didn’t take the time to realize that he was never the wand’s master, which did not allow him to use the wand’s full potential.

In contrast, Grindelwald, at least from what we have been shown so far, is very meticulous and smart dark wizard. He seems to have a highly developed ability to strategize situations, such as his escape from prison in New York, and later the convocation of his meeting at the Lestrange’s mausoleum (although that was a trap).

But, the most impressive ability that Grindelwald possesses is his manipulation skill.

Related: A Guide to the Magical Creatures in ‘Harry Potter’

With his “freedom” promises for the Wizarding community, Grindelwald is able to manipulate and seduce other wizards to join his cause. Two clear examples of this are Grindelwald’s manipulation of one of MACUSA’s employees, Abernathy, to his side that allowed him to escape from the hands of MACUSA (Magical Congress of the United States of America) and the British Ministry of Magic at once.

The other person manipulated to join Grindelwald’s side was Queenie Goldstein. She was so madly in love with the Muggle Jacob Kowalski that she believed that Grindelwald would end the marriage restriction between wizards and Muggles imposed by MACUSA in the United States. Grindelwald was so good at distorting his goals and ideals to what other people wanted that is was easy for him to manipulate people to his side.

But, besides all of the facts stated above, there is one pivotal fact that makes Grindelwald more dangerous than Voldemort — and that is Albus Dumbledore.

If you paid attention to the Harry Potter movies, it is said that Voldemort feared Dumbledore.  In Harry Potter and the Goblet of Fire, fans hear the following quote:

“At that moment, Harry fully understood for the first time why people said Dumbledore was the only wizard Voldemort had ever feared.”

Dumbledore was the only person powerful enough to kill Voldemort in a fair one-on-one duel. Besides that, Dumbledore understood his ambition and greed better than anyone else. Therefore, if it weren’t for the prophecy, Dumbledore could have been the one to defeat Voldemort — and the dark wizard knew it.

For Grindelwald, it was a little different. Grindelwald never feared Dumbledore, but rather, Dumbledore seemed to fear Grindelwald. As shown in the second Fantastic Beasts movie, both wizards knew each other and had once been friends.

The author of the Wizarding World franchise, J.K. Rowling, even once admitted she always viewed Dumbledore as gay, which has led to a lot of speculation that Dumbledore once loved Grindelwald. This has not, however, been confirmed in the Harry Potter canon.

It was said in the movies that no one know which wizard cast the spell that ultimately killed Ariana, but the thought of the spell being from Dumbledore’s wand haunts him for his entire life. Dumbledore feared Grindelwald because he [Dumbledore] knew that Grindelwald knew whose wand had killed the youngest Dumbledore sibling.

In Harry Potter and the Deathly Hallows II, Dumbledore says:

“I knew that we were evenly matched, perhaps that I was a shade more skilful. It was the truth I feared… I dreaded beyond all things the knowledge that it had been I who brought about her death, not merely through my arrogance and stupidity, but that I actually struck the blow that snuffed out her life. I think he knew it, I think he knew what frightened me. I delayed meeting him until, finally, it would have been too shameful to resist any longer. People were dying and he seemed unstoppable, and I had to do what I could.”

The fear of the truth kept Dumbledore from fighting Grindelwald for years, allowing him to spread death, destruction and his terrifying ideals worldwide. If Dumbledore had allowed fear to conquer him and never fought his childhood friend, Grindelwald, with his power, followers and manipulation could have changed the Wizarding World forever!

What do you think? Do you agree that Grindelwald was more dangerous to the Wizarding community than Voldemort? If you don’t agree, why not? Let us know in the comments below.

Comments Off on Why Grindelwald Is More Dangerous Than Voldemort