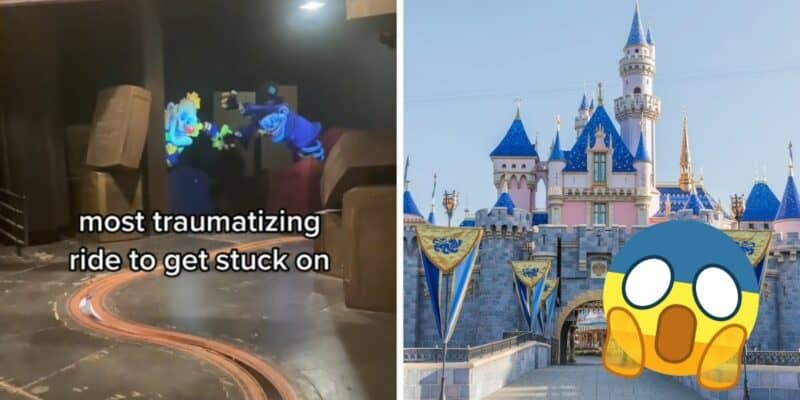 It’s many Disney theme park Guests’ worst fear but most-hoped for situation: to get stuck on an attraction but then get to see the ride with the lights on – and potentially get evacuated backstage.

Popular attractions like Star Wars: Rise of the Resistance in Disney’s Hollywood Studios and Splash Mountain in Magic Kingdom are often reported to break down, with the incredible technology that makes the Star Wars attraction so unique often causing major issues for Guests.

Now one Guest is claiming a classic Disneyland Resort attraction in Anaheim, California is the “most traumatizing” ride to get stuck on.

Many Disney Guests fume when their expensive Lightning Lane purchases for attractions are wasted. Disney CEO Bob Chapek introduced the new Disney Genie digital service in October, and after paying $15 to ride Individual Lightning Lanes like Rise of the Resistance, Guests express disappointment when certain features do not work.

TikTok user @creatingafairytale posted a video of a breakdown experience at Disneyland Park. Roger Rabbit’s Car Toon Spin is a dark ride located at the Disneyland and Tokyo Disneyland theme parks, based on the Steven Spielberg and Robert Zemeckis live-action and animated movie Who Framed Roger Rabbit (1988).

Guests steer a runaway taxicab through the streets of Toontown following the adventures of Roger Rabbit, but when the ride breaks down or stops, @creatingafairytale claims it is the “most traumatizing ride to get stuck on”:

The video shows two clowns from the attraction creepily bobbing and staring at the Disney Guest while the taxicab waits to move. If you have a fear of clowns, this is definitely traumatizing!

The attraction opened in Disneyland in Anaheim, California on January 26, 1994, a year after Mickey’s Toontown opened. The attraction revisits the story of Roger Rabbit as he attempts to rescue his beloved wife Jessica Rabbit from the evil henchman known as the Weasels.

Other TikTok users commented on the Disney ride breakdown video, debating which attraction at Disney Parks is the most traumatic to break down on. Olivia wrote that Pinocchio’s Daring Journey is scary even when it isn’t broken down:

Stina commented that the world-famous “it’s a small world” attraction, which is currently showcasing its magical holiday layover, is the most traumatic breakdown experience:

Eva. A argued that Pirates of the Caribbean, which now features Johnny Depp’s Captain Jack Sparrow character, is the worst ride to get stuck on due to the darkness:

Spamton Looks Delicious certainly had a traumatizing time on Under the Sea ~ Journey of The Little Mermaid because of an animatronic error:

TikTok user Liv. S added to the debate, claiming that Mr. Toad’s Wild Ride in Disneyland Park gave her trauma due to being stopped in the Hell portion of the ride:

I went to Disneyland when I was like 5 I went on mr toad and it stopped in hell. First Disney trip: ✨trauma✨

i would cry if i got stuck on the dinosaur ride

And Sienna had a terrifying adventure on The Twilight Zone Tower of Terror:

What do you think is the most traumatizing attraction to break down on? Let us know in the comments.