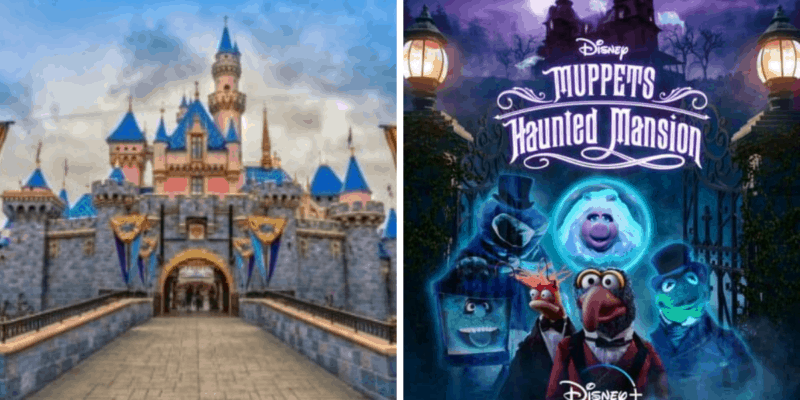 If you’ve been counting down to today’s release of Muppets Haunted Mansion on Disney+, then you’re in for a ghoulish delight!

Today, Disneyland Park opened a new Muppet exhibit! The exhibit will offer a rare behind-the-scenes look at the puppeteering process used in the new Disney+ Halloween special set in the Haunted Mansion and starring Muppet characters including Kermit the Frog, Miss Piggy, the Great Gonzo, and more.

The new Muppets Haunted Mansion movie-making exhibit is located in the lobby of the Great Moments with Mr. Lincoln attraction at the Anaheim theme park.

“This is your peek behind the curtain at the art and design that went into the production of the special itself. One of the things we’re focusing on right now at the Muppets Studio is this idea of the art of puppetry. This is such an incredible handcrafted art form that’s still alive, even in 2021 at a time with all of the digital prowess.”

The new experience adds to the already featured Haunted Mansion art exhibit in the Great Moments with Mr. Lincoln lobby (Great Moments with Mr. Lincoln is located in Town Square on the right as you enter Disneyland Park). Here, Guests can see a funeral wreath and tiny coffins intended for Gonzo and Pepe the King Prawn as well as screen-used props from a scene focusing on a “muppetized” hearse.

You will also be able to learn how the movie-makers puppeteer Gonzo and Miss Piggy, with a coffin and seat cut away to showcase how “muppeteering” works. There is also some humor, with the Muppets adding their own commentary to the artifact plaques.

The Muppets Haunted Mansion exhibit includes several set pieces from the movie, including a seance scene that is expected to feature Imagineering’s Kim Irvine — a well-known figure in the lore of Disneyland’s famed haunted house who stars in the Halloween special.

The idea for the Disneyland exhibit came during Irvine’s celebrity cameo appearance, where the famous Imagineer is expected to play a mansion servant charged with cleaning the Madame Leota crystal ball.

She worked with Iglesias to sort through all the screen-used props and set pieces in the Muppets Studio warehouse while putting together the Disneyland exhibit. Irvine told OC Register:

“When I was on set filming, what I loved so much was just meeting all of the characters for the first time in person. To be able to interact with the Muppets in that way was just a real treat…It was a challenge to figure out how to get [the set pieces] into the building because all the doors to the gallery are pretty small. Our entertainment set team just did an awesome job of taking it apart and then putting it all back together inside the room.”

Irvine, of course, plays Madame Leota in the Haunted Mansion Holiday seasonal attraction at Disneyland, reprising a role created by her mother and fellow Imagineer Leota Toombs, the namesake and original performer seen inside the crystal ball in the attraction’s seance scene.

We have previously reported about the unique Muppet-themed experiences to be had at Disneyland and Walt Disney World Resorts.Disney Parks Blog shared some of the opportunities earlier this week. Check them out below.

Currently at the Magic Key Holder event at Disneyland park, Key Holders can find some fun photo opportunities. Starting Oct. 1, there will be additional photo opportunities near the Esplanade. Check out the uniquely themed Honda Ridgeline that is wrapped to resemble the wallpaper designs that were created especially for “Muppets Haunted Mansion.” Honda is the official vehicle of the Disneyland Resort.

Also beginning Oct. 8, you can visit an exhibit with exclusive content from “Muppets Haunted Mansion” inside the Main Street Opera House, near the pre-show area for Great Moments with Mr. Lincoln.

Available now at PizzeRizzo at Disney’s Hollywood Studios, you’ll want to try one of four different and delicious eclairs, some of which were inspired by the Muppets stretching portraits featured in “Muppets Haunted Mansion.”

Also at Disney’s Hollywood Studios, starting on Oct. 1, you can see exclusive content from “Muppets Haunted Mansion” in the pre-show for Muppet*Vision 3D.

Over at Magic Kingdom Park, beginning Oct. 8, look out for a special Magic Shot that the Disney PhotoPass photographer in front of the Haunted Mansion can add to your photo. You might spot a familiar face floating around your photo as Madame Pigota!

On top of the offerings at both Disneyland and Walt Disney World Resorts, the Disney Music Emporium will include songs from Muppets Haunted Mansion on its Halloween playlist!

The Muppets have not appeared often at the Anaheim theme parks since MuppetVision 3-D closed in 2014 at Disney California Adventure. They will, however, be part of the upcoming holiday event at Disneyland, Disney Merriest Nites.

Halloween is in full swing at Disneyland Park with Oogie Boogie Bash, so these new additions will be a great way for daytime Guests to experience some extra ghoulish fun!

If you want to check out the trailer for the Halloween special, take a look below!

As we have reported, John Stamos will also make a special appearance in the fun Halloween movie along with Imagineer Kim Irvine — the daughter of the original Madame Leota — and Darren Criss, who will play the Haunted Mansion’s groundskeeper who will team up to create “The Boo Crew.” On top of that, Yvette Nicole Brown has been cast to play the hearse driver. There will also be a special appearance by the late Ed Asner.

Are you a Muppets fan? Have you already watched the new Muppets Haunted Mansion special? Let us know in the comments!