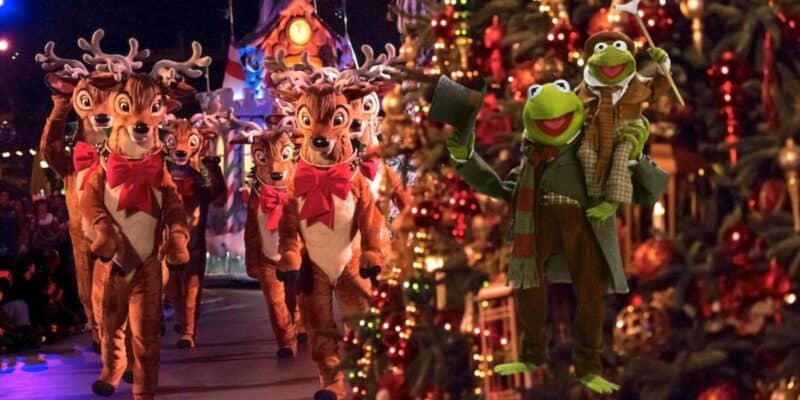 Disneyland just announced a brand new After Hours event for the holidays called, Disney Merriest Nites. This new event promised to spread holiday cheer, and will offer Guests the opportunity to see beloved classic Disney characters, as well as some rare characters!

Related: Disney Brought Back Entertainment! Who You Can See at Disneyland

We did see Disney bring out special characters for the Oogie Boogie Bash at Disney California Adventure this year. These brand new characters included Agatha Harkness from Marvel’s WandaVision on Disney+, Cruella from the new live-action Cruella film, and Sid from Pixar’s Toy Story. You can see a video of those characters here.

As the host of the party, Mickey Mouse will welcome you to the party on Main Street, U.S.A. with Victorian flair, and Kermit the Frog, Miss Piggy and their friends join in the fun, traveling in a special coach with Christmas carol sing-alongs, Muppet antics, and a few chickens! Over in New Orleans Square, Princess Tiana plans to ring in Noel with guests at her bayou-inspired celebration. In Frontierland, Miguel from the Disney and Pixar film “Coco” will be wishing everyone Feliz Navidad while you kick up your heels during a jolly dance-filled fiesta. Three more character-hosted holiday parties await you with a tropical party hosted by Lilo & Stitch in Adventureland, a wintertime celebration with Elsa in Fantasyland, and Buzz Lightyear taking the holidays to new heights over in Tomorrowland. Your friends and family will enjoy enhanced entertainment such as themed photo backdrops and character sightings, and themed specialty food and beverage offerings within the event.

We have not typically seen Lilo and Stitch or The Muppet characters inside of Disneyland so this will be a special treat for those who attend the event!

But that is not all! The official website for Disney Merriest Nites also says this:

Be on the lookout! You may see both rare and classic Disney Characters dressed in their holiday best who will stop by to join the festivities.

There will be even more characters during the event than the ones shared by Disney Parks Blog, so bring your cameras! Ticket’s for Disney Merriest Nites go on sale on September 14, read all about tickets here.

Will you be going to Disney Merriest Nites? Let us know in the comments below!

Want to book a Disneyland vacation? We can help, click here for more information.